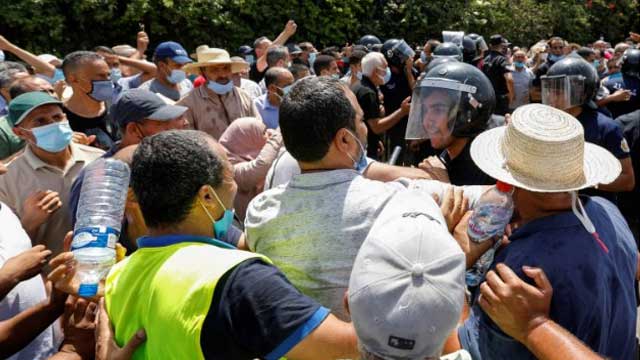 Tunisia's main political parties have accused the president of staging a coup after he sacked the prime minister and suspended parliament.

Kais Saied, who also dismissed the defence minister, says he acted in accordance with the constitution.

The move followed Sunday's violent mass protests over the government's handling of the coronavirus outbreak and the economic and social turmoil.

Calls are now growing from the international community for restraint.

The UN said "all disputes... should be resolved through dialogue", while the EU urged all sides involved to respect the rule of law and avoid violence.

There were similar appeals from the Arab League, Russia and Qatar. The US expressed its concern about the latest developments.

Clashes among Mr Saied's supporters and opponents continued on Monday in the capital Tunis.

They threw stones at each other outside the legislature, which has been barricaded by troops.

Mr Saied, an independent who was elected in 2019, has had a long-standing feud with the man he has removed, Prime Minister Hichem Mechichi.

Mr Mechichi has the backing of the largest party in parliament, Ennahda, who are moderate Islamists.

Tunisia's revolution in 2011 is often held up as the sole success of the Arab Spring revolts across the region - but it has not led to stability economically or politically.

The recent spike in Covid cases has fuelled long-standing public frustration. The health minister was sacked last week after a bungled vaccination drive.-BBC