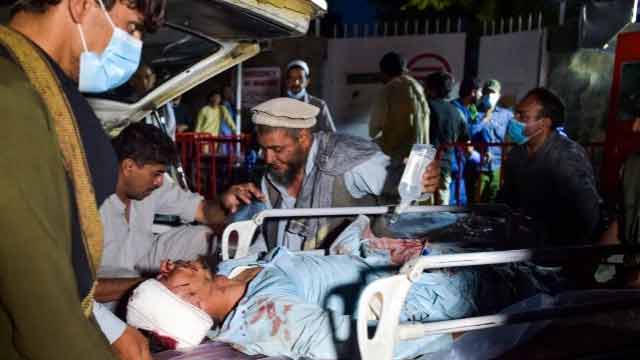 A suspected suicide bomb exploded outside Kabul airport on Thursday, killing at least 13 people including children, a Taliban official said, after the United States and allies urged Afghans to leave the area because of a threat by Islamic State.

The official said many Taliban guards were wounded.

A US official said, US service members were among the wounded, adding he was citing an initial report and cautioning that it could change. He said there were casualties but did not know how many or of what nationality.

Thousands of people have been gathering outside the airport in recent days. Western troops are racing to evacuate foreigners and Afghans who helped Western countries during the 20-year war against the Taliban, and to get out themselves by an August 31 deadline.

A Western diplomat in Kabul earlier said areas outside the airport gates were "incredibly crowded" again despite the warnings of a potential attack.

There were few details yet of the attack, but Western countries have been warning of a potential attack by Islamic State militants.

The Taliban, whose fighters are guarding the perimeter outside the airport, are enemies of the Afghan affiliate of Islamic State, known as Islamic State Khorasan (ISIS-K), after an old name for the region.

"Our guards are also risking their lives at Kabul airport, they face a threat too from the Islamic State group," said a Taliban official, who spoke on condition of anonymity and before the reports of the explosion.

The concerns about an attack came against a chaotic backdrop in Kabul, where the massive airlift of foreign nationals and their families as well as some Afghans has been under way since the day before the Taliban captured the city on August 15, capping a lightning advance across the country as U.S. and allied troops withdrew.-Reuters