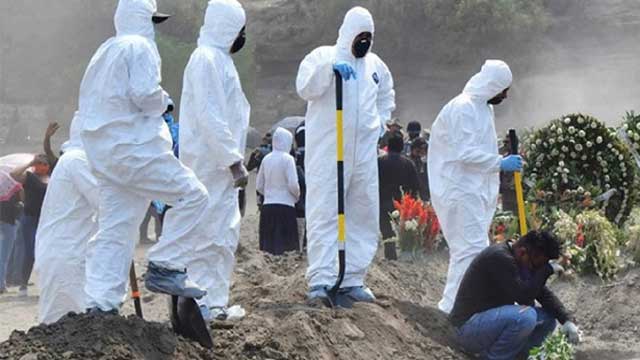 Amid the global scare over the rising Omicron cases, the overall number of Covid cases has now surpassed 333 million.

According to Johns Hopkins University (JHU), the total case count mounted to 333,529,252 while the death toll from the virus reached 5,553,913 Wednesday morning.

This is the sixth consecutive day when more than 200,000 new cases were registered in a day in the country.

Besides, 310 deaths were recorded since Monday morning, taking the death toll to 486,761.

Brazil, which has been experiencing a new wave of cases since last January, registered 23,229,851 cases as of Wednesday, while its Covid death toll rose to 621,803.

The positivity rate in the country jumped to 23.98 per cent from Monday’s 20.88 per cent after testing 35,054 samples, according to the Directorate General of Health Services (DGHS).

The country is currently seeing a surge of Covid-19 cases as health authorities registered 46,885 infections in the last 17 days since 1 January.

The fresh numbers took the country’s total fatalities to 28,164 while the caseload mounted to 1,632,794 on Tuesday.

Among the new deceased, eight were men and two were women.

Seven deaths were reported in Dhaka division while one each in Chattogram, Khulna and Mymensingh divisions.

The mortality rate declined a bit more to 1.72 per cent.

The recovery rate also marked a fall to 95.16 per cent with the recovery of 475 more patients during the 24-hour period.

Meanwhile, Bangladesh’s total tally of Omicron cases reached 55 with the detection of 22 more cases till Monday, according to GISAID, a global initiative on sharing all influenza data.

The country reported this year’s first zero Covid death in a single day on 20 November last year, along with 178 infections, since the pandemic broke out in Bangladesh in March 2020.

Bangladesh reported the highest number of daily fatalities of 264 on 10 August last year, while the highest daily caseload was 16,230 on 28 July last year.