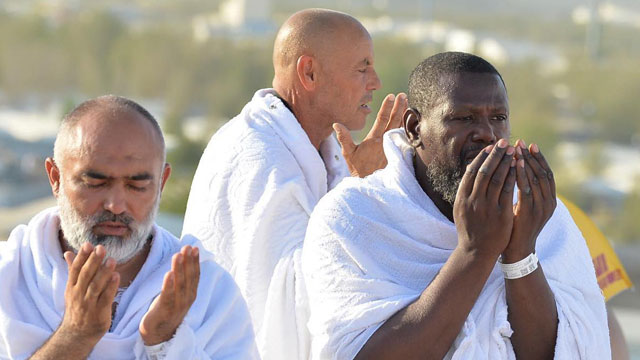 Sheikh Muhammad Al-Issa, member of the Council of Senior Scholars and secretary-general of the Muslim World League (MWL), delivered the Hajj sermon at Masjid-e-Nimra.

Sheikh Muhammad Al-Issa told people that no one but Allah can solve their problems.

During the sermon, he urged the Muslims to be fear Allah as it is the secret of success.

No one but Allah can make your problems go away, he told pilgrims.

Addressing the media and journalists, Dr Muhammad bin Abdul Karim Al-Issa urges them to work to promote Islamic media. Use your pen to raise your voice for justice, he said.

Do not waste your time sitting in front of the channels and roaming around in the markets, Al-Issa said.

Whatever problems you face in the world, it is from Allah, and when you are in the trouble, it is Him who helps you out of it. And there’s no one except Allah who can make your problems go away, he added.

Al-Issa said that hajj can only be successful if one stays away from any kind of fight.

Huge crowds of robed Muslim pilgrims prayed on Saudi Arabia’s Mount Arafat on Friday, the climax of the biggest hajj pilgrimage since the pandemic forced drastic cuts in numbers two years in a row.

Groups of worshippers, many holding umbrellas against the fierce sun, recited verses from the Koran on the rocky rise, where the Prophet Mohammed is believed to have given his final sermon.

Prayers on Mount Arafat are the highlight of the pilgrimage, capped this year at one million people including 850,000 from abroad.

Pilgrims, many in white robes, chanted “Oh God, here I am” as they reached Mount Arafat on foot or in buses from their nearby tents.

After sunset, they will travel the short distance to Muzdalifah, where they will sleep under the stars before performing the symbolic “stoning of the devil” ceremony on Saturday.

“I am so happy to be here… This is the biggest hajj in the coronavirus era, but it isn’t big enough yet,” Egyptian pilgrim Saad Farhat Khalil, 49, told AFP.

“There are one million here today, but if the Saudis allowed more, 10 million would have come,” he added.

Entry roads were packed with worshippers as helicopters buzzed overhead and volunteers handed out bottles of water and collected rubbish in green plastic bags.

The hajj, usually one of the world’s largest annual religious gatherings, is among the five pillars of Islam and must be undertaken by all Muslims with the means at least once in their lives.

A number of world leaders have participated this year, including Mauritania’s president and Indonesia’s vice president. State media on Friday reported that Chechen strongman Ramzan Kadyrov had arrived in the kingdom to perform the hajj.

“In 2020 I thought I would never do hajj. It seemed like the end of time. But here we are today, God is great,” said Bassam Mohammed, another Egyptian pilgrim.

The large crowds have spurred fears that Covid will spread, especially after many pilgrims went without face masks at the Grand Mosque in Mecca, despite claims by Saudi authorities that masks would be mandatory.

The hajj is taking place against the backdrop of a resurgence in the region, with some Gulf countries tightening restrictions to keep outbreaks in check.

All participants were required to submit proof of vaccination and negative PCR tests. On reaching their white-tent encampment at Mina on Thursday, they were handed bags containing masks and sanitiser.

Health ministry spokesman Dr Muhammad al-Abdulaali told a press conference Thursday evening that so far no Covid cases had been detected among the pilgrims, though it was unclear whether widespread testing was taking place.