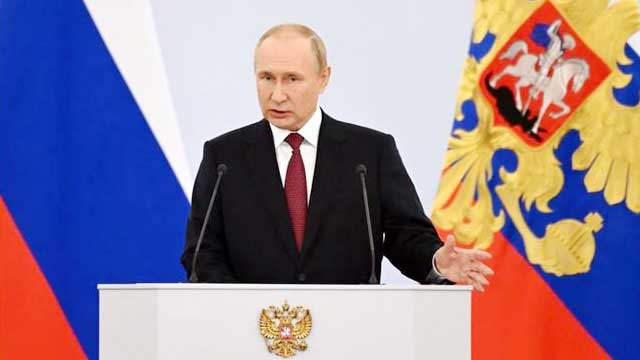 He then joined hands with the Moscow-installed heads of the regions controlled by Russian forces on a stage in front of the Russian elite and chanted alongside them ‘Russia! Russia!’.

Putin annexed the regions despite warnings from the West and the fact that Moscow’s forces do not control the entirety of the regions.

The long-time Russian leader said the people of the regions had made an ‘univocal choice’ to join Russia after so-called referendums that Moscow organised.

‘I want to say this to the Kyiv regime and its masters in the West: People living in the Lugansk, Donetsk, Kherson and Zaporizhzhia (regions) are becoming our citizens forever,’ he said.

The West and international organisations did not recognise the voting, which was organised after Russia seized the territories by force.

In a speech before signing the treaties, Putin demanded that Kyiv stop all military action.

‘We call on the Kyiv regime to immediately stop fighting and stop all hostilities... and return to the negotiating table.’

Putin, who turns 70 next week, sent troops to Ukraine in February.

Last week, he announced a mobilisation to prop up Russian forces fighting in Ukraine who have suffered heavy losses in recent months.-AFP