14 attendees of a funeral killed in Cameroon landslide 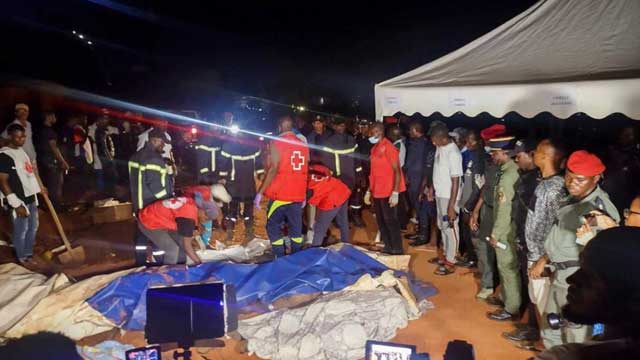 At least 14 people attending a funeral in Cameroon's capital Yaounde were killed by a landslide Sunday, the region's governor said.

The victims were part of a group that had gathered to mourn the deaths of several relatives.

What do we know so far?
Dozens of people were attending a funeral on a soccer pitch at the base of a 20-meter high soil embankment, which collapsed on top of them, witnesses told Reuters.

An AFP reporter saw four large white tents at the hill's summit, on the edge of what seemed to be a ridge, beyond which the ground had disappeared.

"We are carrying the corpses to the mortuary of the central hospital," Naseri Paul Bea, governor of Cameroon's central region, told media at the scene.

"The search to find other bodies under the earth is continuing," he added.

Emergency services were trying to make their way to the site, as hundreds of local people frantically searched for loved ones.

Some people in the crowd wept as emergency workers searched the site.

The disaster happened in the working-class district of Damas, on the eastern outskirts of the capital.

A wetter than usual year

Yaounde is one of the cities in Africa that receives the most precipitation. The capital consists of dozens of steep, shack-lined hills.