After new US security adviser gets applause, Trump considers firing him 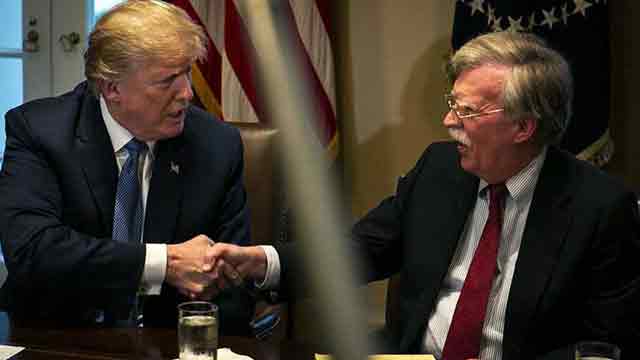 Washington, Apr 17 (Just News): The US President Donald Trump, who doesn't like to be overshadowed by those who work for him, joked Monday that John Bolton, his new national security adviser, could soon be out of a job.

At an event in Hialeah, Florida, staged for Trump to tout the Republican tax cut bill passed last year, he took a moment to crow about the U.S. military strikes in Syria on Friday and pointed out that Bolton was traveling with him.

The crowd erupted in applause.

After a brief pause, Trump playfully asked the crowd: "Are you giving him all the credit? You know that means the end of his job, you know."

Trump went on to share the credit for what he dubbed "a big successful hit," relaying that none of the more than 100 missiles fired into Syria were shot down.

At the event, Trump heard from a handful of business owners who said they had benefited from the tax bill.

Before introducing Bolton, Trump pointed out two other senior administration officials who were accompanying him: Treasury Secretary Steven Mnuchin and Labor Secretary Alexander Acosta, a Miami native and son of Cuban immigrants.

"Not all of my choices were good, but they were great ones," Trump said.-Washington Post