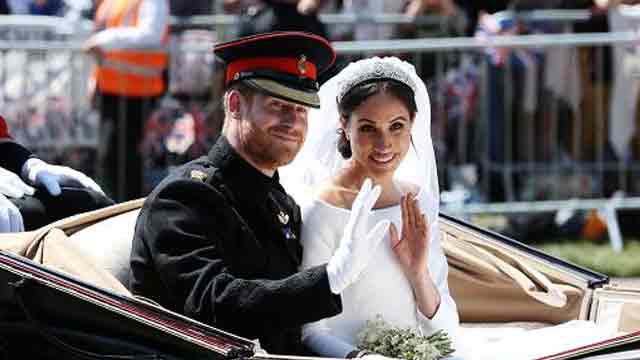 Washington, May 22 (Just News): The royal wedding of Prince Harry and Meghan Markle which took place at Windsor Castle in England drew around an estimated 29 million viewers in the U.S.

Weekends are usually prime time for sleeping in, but on Saturday, millions of Americans woke up early to tune in to the royal wedding of Prince Harry and Meghan Markle.

Nielsen data revealed that the figure is based on the 15 channels that aired the wedding ceremony live, and measures the number of viewers that tuned in when the ceremony officially started at 7 a.m. EST and wrapped at 8:15 a.m. EST. There were also 6.9 million total interactions across Facebook and Twitter regarding the royal wedding, according to Nielsen data.

Meanwhile, the 2011 wedding between Prince William and Kate Middleton garnered significantly fewer eyeballs, with 22.8 million viewers across 11 networks, according to Nielsen.

A survey conducted before the wedding foreshadowed that Saturday's royal nuptials would be a major ratings draw, even more so than Will and Kate's. A third of all those survey respondents claimed they were more likely to watch because Markle is an American.

Indeed, Will and Kate's big day did draw more viewers in the U.K., according to CNN. Across the pond, an average of 24 million people tuned into Prince William and Kate's wedding, compared to the average of 18 million that watched Prince Harry and Markle wed on May 19.

For context, while Prince Harry and Markle's "happily ever after" amassed almost 30 million viewers in the U.S., this year's winter's Olympics in Pyeongchang averaged 19.8 million viewers a night, while the 2018 Super Bowl brought in over 100 million.