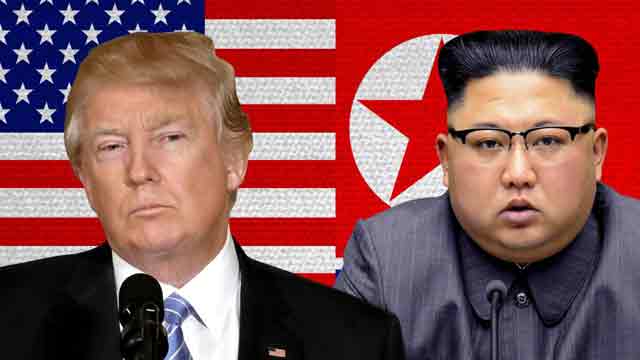 Washington, May 25 (Just News): US President Donald Trump has said his summit with North Korea's leader could still happen on 12 June, despite earlier cancelling the meeting.

"We'll see what happens. It could even be the 12th. We're talking to them now. They very much want to do it, we'd like to do it," he told reporters.

On Thursday, he blamed the North's "open hostility" for the cancellation of his talks with Kim Jong-un.

North Korea later said it was willing to talk "at any time in any form".

The 12 June summit in Singapore would have been the first time a sitting US president had met a North Korean leader.

The details of the now scrapped talks were unclear. But they would have focused on ways of denuclearising the Korean peninsula and reducing tensions.

Just hours before Mr Trump cancelled the summit, North Korea said it had carried out its promise to dismantle tunnels at its only nuclear test site.

What were Mr Trump's latest comments?

Speaking to reporters outside the White House in Washington, the US president said: "We gonna see what happens. We're talking to them [North Korea] now. It was a very nice statement they put out."

Shortly before this, Mr Trump welcomed North Korea's willingness to hold talks "at any time", describing it as "warm and productive".

"We have got... possibly some good news on the Korea summit, where it may, if our diplomats can pull it off, may have it back on," he told reporters.

What about Mr Trump's cancellation letter?

It was personally addressed to Mr Kim.

Mr Trump said he had been "very much looking forward" to meeting Mr Kim.

"Sadly, based on the tremendous anger and open hostility displayed in your most recent statement, I feel it is inappropriate, at this time, to have the long-planned meeting," Mr Trump said in a letter to Mr Kim.

"You talk about your nuclear capabilities, but ours are so massive and powerful that I pray to God they will never have to be used," he added.

But he called the meeting a "missed opportunity", saying "some day, I look very much forward to meeting you".
In a separate statement at the White House, Mr Trump said the step was a "tremendous setback for North Korea and the world", adding the US military was "ready if necessary" to respond to any "reckless" act from North Korea.

A senior administration official in the US later gave further details, saying North Korea had shown "a profound lack of good faith".

There were a series of "broken promises" from Pyongyang, the official told reporters, including when the White House sent the deputy chief of staff to Singapore to meet North Korean diplomats ahead of the summit.-BBC