G7 divides to G6 plus Trump over trade war threat 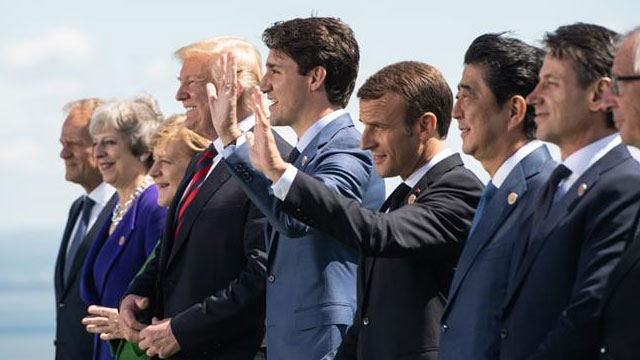 Senior figures, including Trump, suggested that some kind of joint statement on the need to jointly re-examine commercial relationships might be found before their summit ends on Saturday.

But no consensus document will conceal the damage inflicted by the US leader's aggressive imposition of tariffs on what had been some of Washington's closest allies.

Summit host Canada's prime minister Justin Trudeau sided with his European and Japanese colleagues against the US leader and his ‘illegal’ levies on steel and aluminum imports.

Apparently reveling in a rift that threatens to spiral into a trade war, Trump stirred the pot by declaring before the talks began that he would like to see Russia re-admitted to the club.

But this apparently spontaneous suggestion — rejected out of hand by the other allies — did not make it to the summit table, where instead the leaders confronted Trump's assault on the world trade system.

‘I think we had a very open and direct discussion this afternoon, we've always had this kind of discussion. And I think on trade, there is a critical path, there is a way to progress altogether,’ he said, speaking in English.

Trump has invoked a US national security provision to unilaterally impose tariffs on imports of foreign steel and aluminum, to the outrage of his allies, who have retaliated with a threat of their own, more targeted, sanctions.

European leaders met separately Friday ahead of the G7 summit in La Malbaie, a golf resort north of Quebec City, and presented Trump with a united front ‘backed by facts and figures’ to counter his charge, officials said.

Trump said he hoped a final summit communique would be agreed, and officials were to work late into the night, while the leaders enjoyed a campfire chat and circus acts.

Ahead of the encounter, the allies made no secret of their anger at Trump's stance, pointed starkly to fears that he is undermining the rules-based world order and driving former US friends into a damaging trade war.

Donald Tusk, president of the European Council, said that Trump's determination to bait his allies over trade and diplomatic engagements ‘would only play into the hands of those who seek a new post-West order where liberal democracy and fundamental freedoms would cease to exist.’

Canada's foreign minister Chrystia Freeland expressed outrage that Trump had invoked a national security justification for his global tariffs, even on imports from close US allies.

‘We are very clear that Canada does not pose a national security threat to the United States,’ she said.

‘So this an illegal act. It is absolutely unjustified. We have already raised cases at the WTO and at NAFTA, and we will retaliate,’ she warned.

Trump was the last G7 leader to arrive and will probably be the first to leave on Saturday when he sets off for his nuclear summit with North Korea's Kim Jong Un in Singapore.

With unmistakable symbolism, the fractious Western democracies were meeting on the same day that China's president Xi Jinping welcomed his Russian counterpart Vladimir Putin to Beijing.

And at the same time as western nations are at loggerheads, the US president seems more at home with autocrats than with Washington's traditional allies.

The summit is being held at a luxury resort more than two hours' drive from the provincial capital, where more than 400 protesters faced off Thursday and Friday against police.

Previous G7 summits have seen large-scale anti-globalization protests, but Trump was a main target of the demonstration as masked anarchists set fire to US flags and those of other G7 nations.-AFP