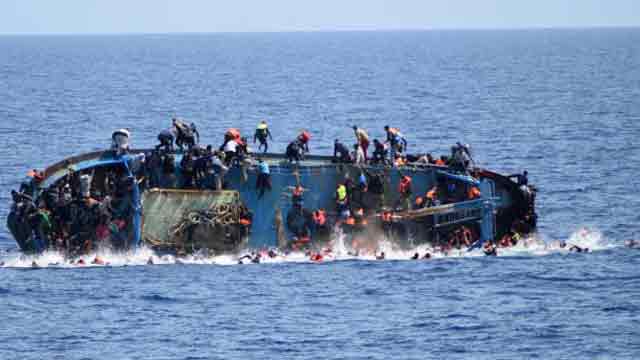 Ventimiglia, Jun 15 (Just News): This handout picture released on 25 May 2016 by the Italian Navy (Marina Militare) shows the shipwreck of an overcrowded boat of migrants off the Libyan coast today. AFP Emmanuel Macron is not a welcome guest in the Italian border town of Ventimiglia, a flashpoint in Europe’s migration crisis.

Residents are furious at the French president for charging Rome with “cynicism and irresponsibility” this week after it turned away a rescue boat carrying more than 600 asylum-seekers.

“It’s bad what happened to the Aquarius (ship) but how dare Macron criticise Italy!” vented retired teacher Fulvia Semeria who volunteers for the Secours Catholique charity, a key aid group for migrants.

“It’s unacceptable from a country that does nothing for migrants and even rejects them,” she said, calling his remarks “insulting and totally unfair”.

The pretty northern town at the gates of the French Riviera has received tens of thousands of asylum seekers pushed back by France since the eruption of Europe’s worst migration crisis three years ago.

This is in addition to scores of desperate African refugees landing on its shores after undertaking the perilous journey across the Mediterranean.

The influx has seen Ventimiglia dubbed the “Calais of Italy”, in reference to the French coastal town notorious for its sprawling migrant camps.

Tapping into anger over the arrivals, the far-right League party reaped a record result of 30 percent in March elections here. The score helped catapult the party and its leader Matteo Salvini into a coalition with the anti-establishment Five Star Movement.

Semeria laments Rome’s rejection of the migrant vessel last weekend-triggering a diplomatic spat between France and Italy-but says it may have been a much-needed “wake-up call for Europe”.

“I have been volunteering here for years and seen so many children and even pregnant women being turned back by France.”

At least 16 migrants have died trying to cross from France into Italy since September 2016, falling off mountains, being hit by cars or electrocuted while hiding under train carriages.

Every morning, Secours Catholique hands out food, clothes and medicine to hundreds of asylum seekers-many from Sudan, South Sudan and Eritrea-in central Ventimiglia.

The struggle to help them increased last summer when police shut a nearby migrant camp, opened by the local church following an appeal from Pope Francis, after receiving complaints from residents.

Instead, some 400 migrants are now hosted at a Red Cross site outside town.

“It’s enough, Italy’s fed up! Why should it all fall on us?” exclaimed vendor Giuseppe Piccolo, 60, at Ventimiglia’s famed market.

The fresh produce draws many French visitors who travel in the opposite direction of the migrants for their weekly shopping.

“Yes, I’ve voted for the League, against the migrants,” Piccolo told AFP.

“Sadly, Salvini was right to do so. It needs to serve as a lesson because we can’t cope here anymore,” Regina said.

Under a current bilateral agreement, France can return more than 85 percent of all rejected migrants to Italy.

For now, French officials say that the system continues to work.

Since entering government, he has reiterated his pledge to clamp down on illegal immigration and already made good to on his promise to turn away boats.

In light of recent developments, the centre-left mayor’s office is feeling the heat ahead of regional elections in 2019.

“From one day to the next in 2015, we found ourselves with hundreds of people at our train stations,” she told AFP.

“We are doing what we can to maintain the dignity of migrants and of our citizens who have the right to not see their town turn into a camp.”