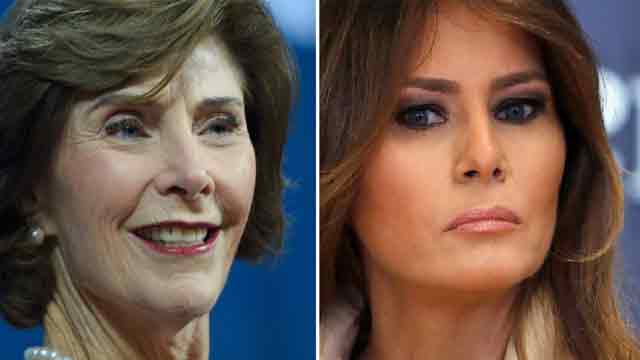 Washington, Jun 18 (Just News): The former US First Lady Laura Bush has condemned a controversial policy that splits up families who illegally enter the country at the Mexican border.

Writing in the Washington Post newspaper, she describes the separation of children from their parents as cruel, immoral and heart-breaking.

Mrs Trump "hates to see children separated from their families", her spokeswoman said.

She repeated her husband's call for "both sides" to work on immigration reform as a solution. However, fact-checkers point out that the policy was introduced by Mr Trump's attorney general and does not require congressional action to be stopped.

In a recent six-week period there were nearly 2,000 family separations following a crackdown on illegal border crossings.

Adults who try to cross the border outside of official entry points - many planning to seek asylum - are placed in custody and face criminal prosecution for illegal entry.

As a result, hundreds of children and babies are now being housed in detention centres, including warehouses and converted supermarkets, and kept away from their parents.
What's been said?

Laura Bush, wife of the former Republican President George W Bush and a Texas resident, launched an outspoken attack on the policy.

"This zero-tolerance policy is cruel. It is immoral. And it breaks my heart," she wrote in the Washington Post.

"Our government should not be in the business of warehousing children in converted box stores or making plans to place them in tent cities in the desert."

"These images are eerily reminiscent of the Japanese American internment camps of World War Two, now considered to have been one of the most shameful episodes in US history," she added.

Earlier Mrs Trump said she "hates to see children separated from their families and hopes both sides of the aisle [Republicans and Democrats in Congress] can finally come together to achieve successful immigration reform".

The first ladies' comments come amid growing alarm over the impact of the policy.

On Monday, UN human rights chief Zeid Ra'ad al-Hussein called on the US to end what he called its "unconscionable" strategy of forced separations.

Earlier Department of Homeland Security Secretary Kirstjen Nielsen defended her agency's role at the border, saying: "We do not have a policy of separating families at the border. Period."

But she said authorities would remove children if the parent they were travelling with had broken the law.
Who is to blame?

Mr Trump has said a law "Democrats gave us" is responsible for the policy, but it is unclear which law he is referring to.

In a tweet on Saturday he urged Democrats to work with Republicans to create new legislation.

However, critics have pointed out that detaining children separately from their parents is the consequence of a policy announced by Attorney General Jeff Sessions last month to deter new arrivals.

The significant change, analysts say, is the justice department's decision to prosecute parents if they illegally cross the border, even if it is their first offence. The children are not charged with a crime, which means they cannot be jailed together.

Until this policy was announced, such families were usually subject to civil deportation proceedings, which did not require separation.

The recent child detentions have resulted in some shelters and foster homes reporting that they are running out of space.

"They call it zero-tolerance, but a better name for it is zero-humanity. And there is zero logic to this," Sen Jeff Merkley of Oregon, who organised a visit to Casa Padre detention centre in Brownsville, Texas, told the BBC.

"What we saw is this huge warehouse, it was a super centre for Walmart before, now it's a super detention centre. It's holding almost 1,500 kids inside there."

Vermont congressman Peter Welch said he saw children held "in chain link cages" in a processing facility and one shelter "filled to capacity".

Local lawmaker Jose Rodriguez described the plan as "totally inhumane" and "outrageous", adding: "It should be condemned by anyone who has a moral sense of responsibility."

Protesters marched to one such tent city in Tornillo, Texas, on Sunday where hundreds of children were being held separately from their parents.

The policy faces legal challenges, including a federal case brought by the American Civil Liberties Union

The number of families trying to enter the US overland without documentation is on the rise. Mr Sessions has recognised this, commenting last month that current immigration trends "must end".

In the first two weeks of the new "zero-tolerance" approach, 658 minors - including many babies and toddlers - were separated from the adults that travelled with them, according to US border officials.

In many of the cases, the families have been reunited after the parent was released from detention. However, there are reports of people being kept apart for weeks and even months.

But it is not clear if this new tougher policy will stop the migrants from travelling.

This is because many are fleeing violence and poverty in countries such as Honduras and El Salvador, and staying put is often fraught with dangers.