Trump-Putin summit agreed by US and Russia in principle 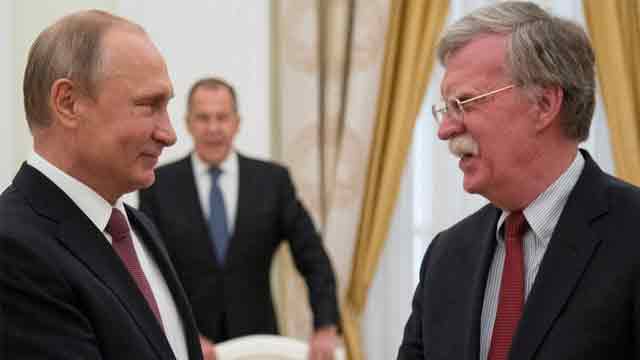 Washington, Jun 28 (Just News): Moscow and Washington have agreed to hold a long-delayed summit between US President Donald Trump and Russia's Vladimir Putin.

The announcement follows a meeting between President Putin and US National Security Adviser John Bolton.

Mr Trump said his meeting with Mr Putin could take place after next month's Nato summit in Brussels.

The president said the meeting could possibly take place in the Finnish capital, Helsinki.

He told reporters he would discuss the war in Syria and the situation in Ukraine with his Russian counterpart.

Mr Trump last met the Russian president in November in Vietnam on the sidelines of an Asia-Pacific summit.

The decision to hold a meeting between the leaders was announced earlier on Wednesday by a Kremlin foreign policy adviser, Yuri Ushakov.

The summit would take place in a mutually convenient third country, with the date and location to be officially announced on Thursday, Mr Ushakov said.

After talks with the Russian leader, Mr Bolton confirmed at a news conference in Moscow that Mr Trump would meet Mr Putin in the coming weeks.

"President Trump asked me to come and speak to Russian authorities about the possibility of a meeting between him and President Putin," he said.

Both leaders wanted to use the summit to improve relations between their countries, Mr Bolton said.

"Both President Trump and President Putin feel that it's important for these two leaders of these two critically important countries to get together and discuss their mutual problems and areas of co-operation. It's something that I think both feel will contribute to improvements in the US-Russia bilateral relationship and in stability around the world," he added.-BBC