Democrats triumph over Roy Moore in major blow to Trump 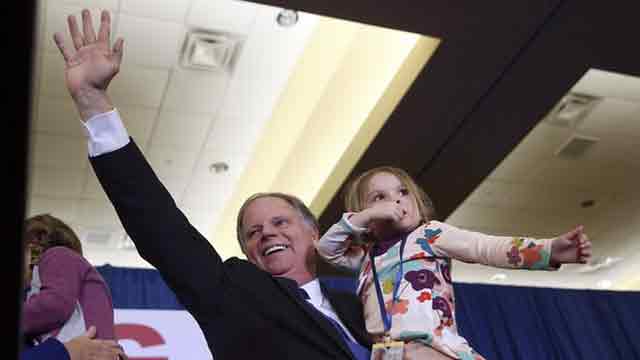 His victory in a special election for a US Senate seat – by a margin of 49.9 to 48.4 with 100% of precincts reporting – is a major personal blow to the president and his efforts to pass tax reform on Capitol Hill.

Jones was able to become the first Democrat in a decade to win any statewide office in Alabama by beating Moore, who had faced multiple allegations of sexual assault during a campaign which exposed Republican party faultlines.

Who is Doug Jones?

Moore, who late on Tuesday was refusing to concede the race, had been favored in the deep red state until two women came forward to claim that Moore assaulted them when they were teenagers; a number of other women said the Alabama Republican had romantically pursued them when they were underage.

'It's not over': Roy Moore refuses to concede in Alabama Senate race – video

Alabama has long faced a profound racial divide, which was reflected in the results. According to an exit poll, Jones won 95% of the African-American vote but only 27% of the white vote in the Yellowhammer State. However, widespread African-American turnout on Jones’s behalf overcame Moore’s margins in rural, predominantly white parts of Alabama.

Jones also made significant inroads among college-educated whites. He won well-educated Madison county by a margin of 57-40. A center of the aerospace industry, the county voted for Trump by a margin of 55-38 in 2016.

‘More in common than what would divide us’

Jones emerged to a euphoric reception just before 10pm local time. “Folks, I gotta tell you, I think that I have been waiting all my life and now I just don’t know what the hell to say,” he said, beginning a 10-minute speech. “I have always believed that the people of Alabama had more in common than what would divide us.”

His speech was met with cheers and applause and chants of “USA! USA!”

The Democratic victory will reduce the Republican majority in the Senate to 51-49 once Jones takes his seat on Capitol Hill. This significantly reduces the margin for error as Republicans attempt to push through a major corporate tax cut.

They already have one defector in senator Bob Corker, and Jones’s election means a single additional Republican breaking ranks would sink the legislation.

Moore’s defeat also marks a major personal blow to Trump, who endorsed the Alabama Republican and held a rally on his behalf just over the state line in Pensacola, Florida. Although most national Republicans rushed to distance themselves from Moore in the aftermath of the allegations, Trump reaffirmed his support through tweets and public statements.

Early on Wednesday morning, the president tried to claim he had always known Moore would lose, recalling his backing for opponent Luther Strange in the Republican primary that had preceded the special election. “The reason I originally endorsed Luther Strange (and his numbers went up mightily),” Trump wrote, “is that I said Roy Moore will not be able to win the General Election. I was right! Roy worked hard but the deck was stacked against him!”

Moore’s defeat is a significant blow to the efforts by Steve Bannon and the populist Trump wing of the Republican party to undermine Senate majority leader Mitch McConnell.

Bannon and his allies are planning a series of primary challenges against establishment Republicans in 2018. Moore’s defeat significantly reduces their leverage as the joint efforts of Bannon and his rightwing news website, Breitbart, could not elect their preferred candidate in a state that Trump won in a landslide in 2016.

Steven Law, the head of the McConnell-allied Senate Leadership Fund, put the blame squarely on Bannon moments after the race was called. “This is a brutal reminder that candidate quality matters regardless of where you are running,” Law said. “Not only did Steve Bannon cost us a critical Senate seat in one of the most Republican states in the country, but he also dragged the president of the United States into his fiasco.”
Cory Gardner, the head of the National Republican Senate Committee, which flatly refused to back Moore, said: “Tonight’s results are clear: the people of Alabama deemed Roy Moore unfit to serve in the US Senate.”

While national Republicans accepted defeat, at Moore’s election night event, the candidate and his supporters still held out hope.
‘The evening is not over yet’

Moore’s campaign chairman, Bill Armistead, took the stage to insist that “the evening is not over yet” and cited Alabama’s provision for an automatic recount if result was within half of a percentage point. He also noted optimistically that there were still outstanding military ballots.

Moore then took the stage to say: “When the vote is this close, it’s not over.” He then bemoaned that he had been “painted in an unfavorable and unfaithful light” before urging attendees to go home and go to sleep.
Roy Moore supporters react to the loss on election night.

Cal Zastrow, a friend of Moore who had come down from Michigan to volunteer for the campaign, tried to frame the results within a bigger picture. “I was cheering for him and supporting him but Jesus is wonderful whether Roy Moore wins or loses,” he said. “I’m not distressed. I’m not discouraged. Jesus is wonderful.”

At Jones’ election night party hundreds of supporters, many waving signs, erupted in cheers at a hotel ballroom in Birmingham when, on giant TV screens, CNN declared the race for the Democrat. There were hugs, smiles, tears and chants of “We want Doug!” The raw emotion was evident.

John Parker, 26, a bartender, said: “I think it’s astounding and unprecedented in Alabama politics, and a response to what we’re seeing nationally. This is a direct response to President Trump. Roy Moore is unfit for any job, let alone [that of] a public servant. Alabama tonight voted for America.”

He added: “There is hope and joy. Tomorrow’s another day in Alabama.”- The Guardian