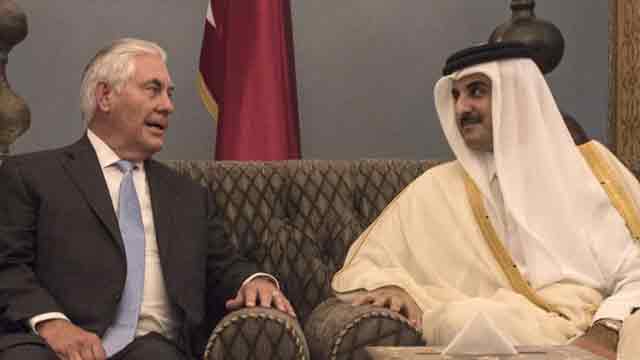 Washington, Aug 2 (Just News): Saudi Arabia and the United Arab Emirates planned to launch a military operation against Qatar at the beginning of a diplomatic crisis that erupted in June last year but were stopped by former US Secretary of State Rex Tillerson in an act that may have played a key role in his dismissal.

According to the investigative news website The Intercept, the plan involved Saudi ground troops crossing the land border into Qatar, and with military support from the UAE, advancing 100km inland and seizing the Qatari capital.

Based on information it said it received from a current member of the US intelligence community and two former Department of State officials, The Intercept said the coup, which was largely devised by Saudi Arabia and the UAE's crown princes, "was likely some weeks away from being implemented".

It said the attack against Qatar's emir, Sheikh Tamim bin Hamad Al Thani, would have involved Saudi forces circumventing the Al Udeid Air Base, which is home of the US Air Force Central Command and some 10,000 American troops, and seizing Doha.

Al Udeid serves as one of the US' most important overseas military bases and carries out operations throughout the Middle East.

However, after Tillerson was notified of the plan by Qatari intelligence officials, he reportedly urged Saudi Arabia's King Salman not to carry out the attack and also encouraged Defense Secretary James Mattis to explain the dangers of such an invasion to his counterparts in the kingdom, it said.

Pressure from Tillerson caused Mohammed bin Salman, also known as MBS, to back down, who was concerned that the invasion would damage Saudi Arabia's long-term relationship with the US.

MBZ has had a long-running rivalry with Qatar and supported a failed coup against the Qatari government in 1996 when he served as chief of staff of the UAE armed forces.

The Intercept said none of the current or former officials interviewed by The Intercept had direct insight into why Trump decided to fire Tillerson, but one source said that the timing - a week before the Saudi crown prince arrived in Washington for a much-publicised visit - was significant.

Tillerson, a former executive for the energy company Exxon, had repeatedly criticised the blockading countries for the crisis before his dismissal, and in October last year, accused them of heightening tensions.

"There seems to be a real unwillingness on the part of some of the parties to want to engage," Tillerson said at the time.

"It's up to the leadership of the quartet when they want to engage with Qatar because Qatar has been very clear - they're ready to engage."

Tillerson has not given any interviews since he was replaced with Mike Pompeo, but is believed to have disagreed on a number of issues with President Donald Trump, including the blockade of Qatar.

According to one news report, Tillerson was frustrated with Trump for endorsing the blockade, with his aides suspecting that a line in the president's speech where Qatar was accused of funding terrorism at a "very high level" had been written by the UAE's ambassador, Yousef al-Otaiba.

Otaiba is a well-known figure in US national security circles, and according to Politico maintains "almost constant phone and email contact" with Trump's son-in-law Jared Kushner.

The Intercept also reported that four of the sources it interviewed pointed to an ongoing campaign by the UAE to try to provoke Qatar into escalating the crisis.

The UAE has made it illegal for people to express sympathy with Qatar on social media, meanwhile Emirati officials, with close links to its leadership, repeatedly hurl insults against Qatari women.

Saudi Arabia, the UAE, along with Egypt and Bahrain severed diplomatic and trade links with Qatar on June 5, accusing Doha of supporting "extremism and terrorism" and cosying up to Iran.

Qatar has vehemently denied all allegations.

The quartet subsequently ordered Qatari nationals to leave their countries, and also urged their citizens to return to their respective nations, disrupting the lives of thousands in the region and restricting their freedom of movement.

According to several media reports, the four countries want Qatar to join a regional alliance against Iran and normalise relations with Israel.

Qatar's emir has denounced all of the attempts to infringe on the Gulf nation's sovereignty and rejected all of their demands.-Al Jazeera