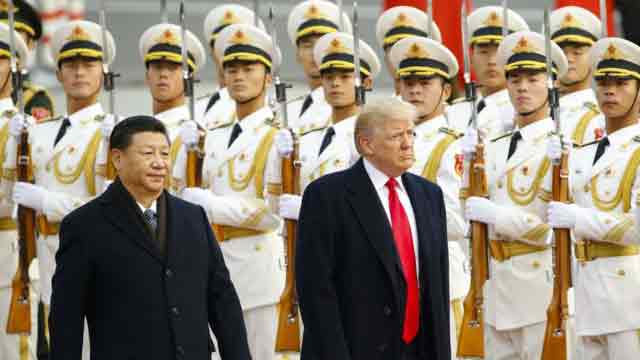 The review of the higher tariff is a request from President Donald Trump, who wants China to change its trade practices.

However, the decision risks escalating tensions between the world's two largest economies.

China has already warned it would retaliate if the US went ahead with the plan, accusing Washington of blackmail.

"If the US side takes steps to further escalate the situation, we will definitely take countermeasures to resolutely safeguard our legitimate and legal rights and interests," said foreign ministry spokesperson Geng Shuang on Wednesday.

The White House says the tariffs are a response to China's unfair trade policies, which Mr Trump blames for helping to create a huge trade deficit.

A first round of tariffs came into effect on 6 July, when the US imposed 25% taxes on $34bn of Chinese imports. China retaliated in kind.

Tariffs on another $16bn of products are pending, the second part of tariffs on $50bn worth of imports that the US announced in March.

US threats have escalated since, with the President saying he is ready to impose tariffs on all $500bn of Chinese imports.

In July, the US published a list of $200bn worth of additional products to be hit with tariffs of 10% - a figure the US is now considering raising to 25%.

US Trade Representative Robert Lighthizer said: "The increase in the possible rate of the additional duty is intended to provide the administration with additional options to encourage China to change its harmful policies and behaviour and adopt policies that will lead to fairer markets and prosperity for all of our citizens."

The list named more than 6,000 items worth $200bn in annual trade, including chemicals, textiles, minerals and consumer goods ranging from baseball gloves to frozen fish fillets.

Before the tariffs go into effect, they are subject to a public comment period. The duties could take effect as soon as September.

Some US politicians expressed support for the White House move.

Senator Marco Rubio, a Republican from Florida, tweeted "the only way to remove barriers is to demonstrate to [China] our willingness to retaliate with barriers".-BBC