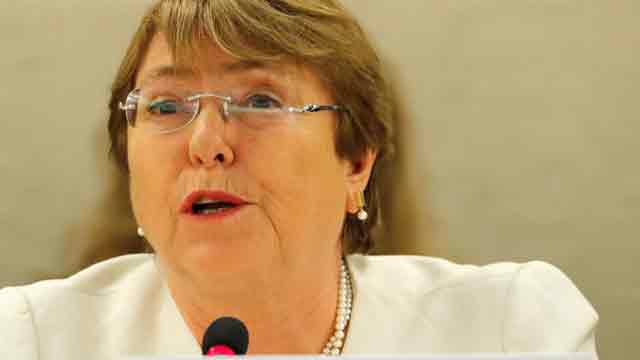 Geneva, Sep 10 (Just News): United Nations human rights chief Michelle Bachelet called on Monday for a new quasi-judicial body to collect evidence with a view to future prosecution of crimes against Muslim Rohingya in Myanmar including murder and torture.

An independent UN team of investigators said in a report last month that there was evidence indicating ‘genocidal intent’ by the military against Rohingya and that crimes against humanity and war crimes appear to have been committed.

The investigators named six generals, including the commander-in-chief, whom they said should face justice.

A year ago, government troops led a brutal crackdown in Myanmar’s Rakhine state in response to attacks by the Arakan Rohingya Salvation Army on 30 Myanmar police posts and a military base. Some 700,000 Rohingya fled the crackdown and most are now living in refugee camps in neighbouring Bangladesh.

Bachelet, in her first speech to the Human Rights Council since taking office on Sept. 1, said that attacks and persecution appear to continue in Rakhine state. Investigators had also found indications of executions, torture and sexual violence against minorities in Kachin and Shan states, she said.

‘The persistence of these patterns of violations underscores the total impunity accorded to the Myanmar security forces,’ Bachelet told the 47-member Geneva forum which opened a three-week session.

She welcomed a decision by the prosecutor of the International Criminal Court last week that it has jurisdiction over alleged deportations of Rohingya from Myanmar to Bangladesh as a possible crime against humanity.

‘This is an immensely important step towards ending impunity, and addressing the enormous suffering of the Rohingya people.

‘I also welcome efforts by Member States at this Council to establish an independent international mechanism for Myanmar, to collect, consolidate, preserve and analyse evidence of the most serious international crimes, in order to expedite fair and independent trials in national and international courts.’

The new mechanism — similar to what has been set up for crimes in Syria — would complement and support the preliminary examination of the ICC prosecutor, she added.

‘I urge the Council to pass a resolution and refer the matter to the (UN) General Assembly for its endorsement so that such a mechanism can be established,’ she said.

Myanmar has denied committing atrocities against the Rohingya, saying its military carried out justifiable actions against militants. It has so far signalled it does not intend to cooperate with the international court.-Reuters