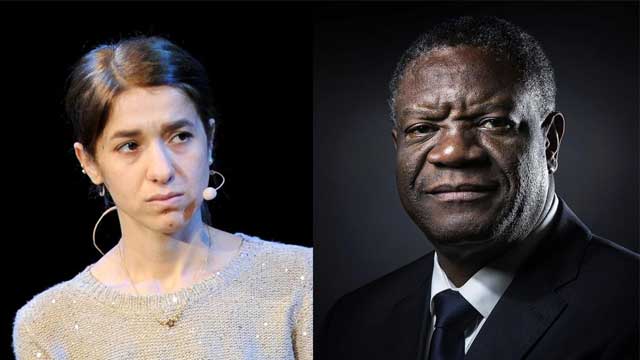 Oslo, Oct 5 (Just News): Denis Mukwege and Nadia Murad have won the Nobel Peace Prize for their efforts to end sexual violence as a weapon of war and armed conflict.

Dr Mukwege has devoted his life to defending victims of war-time sexual violence while Ms Murad, who is Yazidi, has campaigned through telling of the sexual abuse she suffered at the hands of Islamic State, as well as others.

The GP and his staff have treated thousands of patients who have been assaulted in the Democratic Republic of Congo.

He has repeatedly condemned impunity for mass rape in the country, and criticised the Congolese government and other countries for not doing enough to stop the use of sexual violence against women as a weapon of war, the Nobel committee said.

At just 23-years-old Ms Murad became the UN's first goodwill ambassador for the dignity of survivors of human trafficking after speaking openly about what she suffered before she escaped Islamic State.

The committee said: "She has shown uncommon courage in recounting her own sufferings and speaking up on behalf of other victims.

"Nadia Murad is one of an estimated 3,000 Yazidi girls and women who were victims of rape and other abuses by the IS army.

"The abuses were systematic and part of a military strategy. They served as a weapon in the fight against Yazidis and other religious minorities."

The committee said about Dr Mukwege: "Denis Mukwege's basic principle is that 'justice is everyone's business'.

"The 2018 Peace Laureate is the foremost, most unifying symbol, both nationally and internationally, of the struggle to end sexual violence in war and armed conflicts."

The nine million Swedish kronor (£777,000) prize will be shared between the two laureates.

The Norwegian Nobel Committee received 216 nominations for individuals and 115 organisations.

Only a few dozen of the nominees were known before the announcement, as the committee keeps the list of nominations secret for 50 years.

Some candidates are revealed by those who have nominated them.

The committee has come under criticism for some of the prizes it has awarded, including to former US president Barack Obama, who won in 2009 before achieving anything in office.

The Nobel committee has said it will not strip Myanmar leader Aung San Suu Kyi of her 1991 prize, despite calls for her to lose it for her lack of response to the Rohingya crisis.

On Tuesday the Nobel Prize in Physics was won by a woman for the first time in 55 years, after Marie Curie won it in 1903 and Maria Goeppert-Mayer in 1963.

Canadian scientist Donna Strickland shares the prize with Arthur Ashkin from the US and Gerard Mourou from France for their discoveries in the field of laser physics.-Sky News