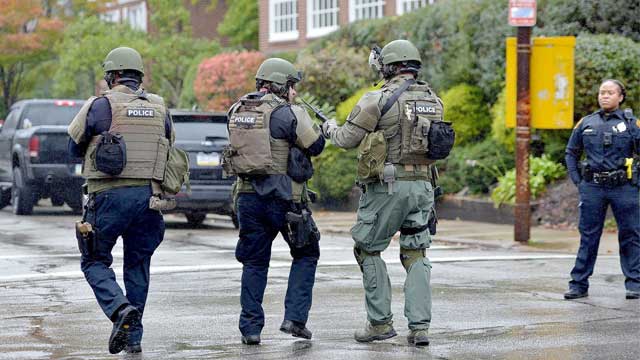 Washington, Oct 27 (Just News): A gunman has opened fire in a US synagogue leaving at least eight dead during a prayer service.

Police rushed to the scene at the Tree of Life Congregation Synagogue in Pittsburgh following reports of an active shooter.

Officers exchanged gunfire with the suspect and had to use their vehicles as a shield to protect themselves from the bullets.

At least three of the officers were shot - their conditions are not yet known.

The synagogue was full of 60-100 worshippers attending Shabbat services when the gunman burst in and opened fire, US media is reporting.

Some fled in terror and took refuge in the synagogue's basement where three people were reportedly shot.

Others barricaded themselves in different rooms and phoned police for help.

The injured suspect has now apparently surrendered and is being taken to hospital.

He was carrying multiple weapons and has been described as a 46-year-old white man 'with a beard,' according to authorities.

The area has been sealed off and people are being urged to stay away, while residents are being told to not leave their homes.

The synagogue is currently being checked for explosives that the shooter might have deposited, according to authorities.

The gunman’s condition is unknown at this moment.

Local hospitals are clearing emergency rooms to tend to patients.

Journalist Steve Herman says the suspect told police at the scene: "All these Jews need to die".

A number of people remain inside the building and officers are trying to evacuate them, according to BNO News.-Mirror