Denmark to give additional $4.6 mil funding to Rohingyas 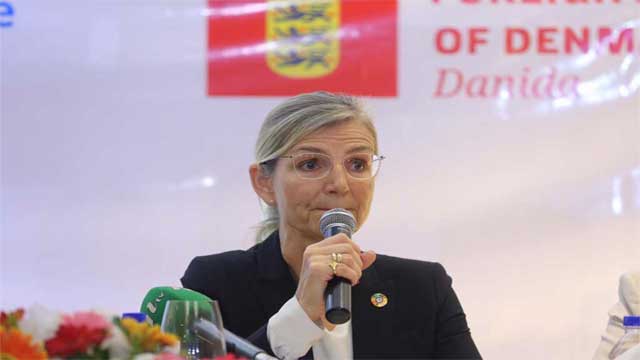 Dhaka, Oct 31 (Just News) : Supporting Rohingyas in Myanmar and Bangladesh through several programs, they are giving a total value of $48.5 million in humanitarian assistance

The Danish Minister for Development Cooperation Ulla Tørnæs has announced its support funding of $4.6 million (30 million DKK) to meet the urgent food needs of Rohingya refugees and their host communities.

Ulla Tørnæs made the announcement at a press conference at the Westin Hotel on Wednesday morning after her visit to the refugee camps in Kutupalong-Balukhali, Cox’s Bazar, with the Executive Director of the United Nations World Food Programme (WFP) David Beasley.

The Danish government was one of the first donors to support WFP tomeet the urgent the humanitarian needs of the Rohingya refugees. Denmark has allocated $13 million (85 million DKK) to WFP’s efforts in relation to the crisis since August 2017.

The minister also said her government will do whatever it needs to pressure the Myanmar government to ensure the safe repatriation of the displaced Rohingya.

She claimed her government, along with the United Nations and the European Union, has imposed sanctions on Myanmar government officials and army personnel who are directly involved with the Rohingya massacre.

Ulla Tørnæs said: “It has been one year since I last visited these camps. I am pleased to see positive changes. I am impressed with the results of the combined efforts of the international community and the government of Bangladesh."

“There is of course much more to be done. Yet I must express appreciation for the work the World Food Programme is carrying out in support of 870,000 refugees with protection, food and shelter. I also commend the efforts by the government of Bangladesh supporting the Rohingya refugees. Denmark remains committed to stand by Bangladesh,” she added.

Stating that this crisis must not be forgotten, WFP Executive Director Beasley said: “I am grateful to the people of Bangladesh for all that has been done to offer sanctuary to those who fled Myanmar, and I am grateful to the financial support and partnership of Denmark,which has allowed WFP to continue its work here."

He further said the international community needs to work with Bangladesh to give the Rohingya children not just hope for a better future, but also the tools to thrive, including food, health and education.

According to Beasley, Denmark is supporting the Rohingyas in Myanmar and Bangladesh through several partners including the WFP, UNHCR, ICRC, IOM, the Danish Refugee Council and other NGO programs for a total value of $48.5 million (318 million DKK) in humanitarian assistance.

After the military crackdown in Myanmar’s Rakhine state on August 25 last year, more than 700,000 Rohingyas – mostly children and women – crossed over to Bangladesh.

They joined more than 400,000 existing refugees who were already living in squalid, cramped camps in Cox’s Bazar.

On Tuesday, Bangladesh and Myanmar agreed to start repatriating the first group of Rohingyas by mid-November.

Earlier in May, the Myanmar side of the Joint Working Group (JWG) urged the Bangladeshi side to commence repatriation of the prior-verified 778 Muslim and 444 Hindu Rohingyas.