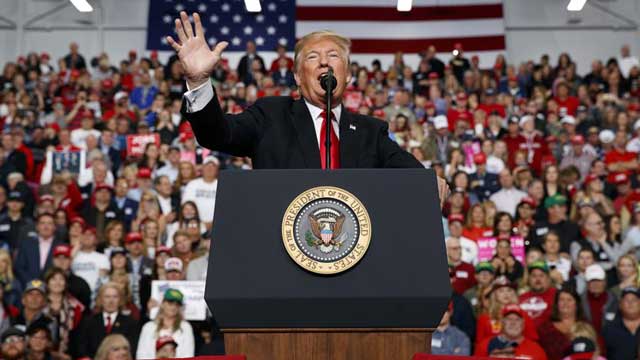 Washington, Nov 7 (Just News): The US President Donald Trump has hailed a "big victory" in US mid-term elections after Democrats seized the House of Representatives but Republicans consolidated their grip on the Senate.

The Democratic majority in the lower chamber will be in a position to block Mr Trump's legislative programme.

The vote was seen as a referendum on the president, even though he is not up for re-election till 2020.

The result confirms a historical trend for the party that is not in the White House to make gains in the mid-terms.

The Republicans' control of the Senate is arguably more significant, says the BBC's Aleem Maqbool in Washington, because Mr Trump focused his campaigning on Senate races, and candidates he backed clearly benefited.

Mr Trump will now feel that his base has endorsed his actions over the past two years, our correspondent says.

House Democratic leader Nancy Pelosi promised that her party would serve as a counterweight to the White House.

Ms Pelosi - who is set to become speaker, a position she held from 2007 to 2011 - told supporters: "Today is more than about Democrats and Republicans. It's about restoring the Constitution's checks and balances to the Trump administration."

What difference will the new Congress make?

The Democrats gained more than the 23 seats they needed for a majority in the 435-seat lower chamber.

They could now launch investigations into Mr Trump's administration and business affairs, from tax returns to potential conflicts of interest.

The Democrats could also more effectively block his legislative plans, notably his signature promise to build a wall along the border with Mexico.

In the Senate, Democrats were facing an uphill battle because they were defending 26 races, while just nine Republican seats were up for grabs.

The Republicans are on course to increase their representation from 51 to 54 in the 100-seat Senate upper chamber.

Mr Trump has threatened to retaliate for any Democratic investigations with his own probes in the Senate into alleged "leaks of classified information".

Even handing over power to Democrats in the House may have a bit of a silver lining for the president.

Now he will have someone to blame if the economy takes a turn for the worse (and, given business cycle realities, it might). He's got a ready-made explanation for why he can't get anything done in the next two years - and a pitch for what needs to change in the next election.

Day in and day out, he'll have a set of clear political opponents to contrast himself with.
Media captionThe BBC's Anthony Zurcher explains what losing the House means for Donald Trump's presidency.

Both Bill Clinton and Barack Obama lost control of the House in their first term in office and went on to win re-election. History, serving as a guide, predicted this would probably be a bad night for the president.

History also indicates that while the road may be rocky, better days could be ahead.-BBC