12 killed in shooting at California bar 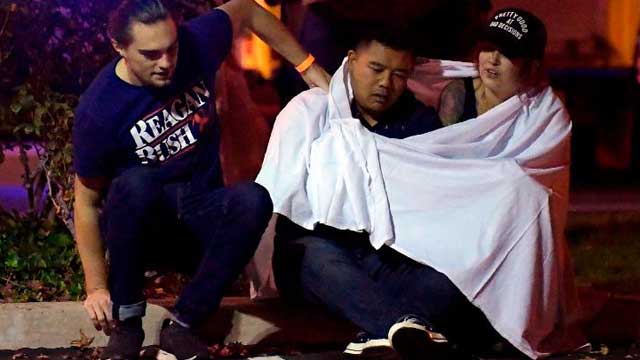 California, Nov 8 (Just News): A gunman burst into a packed bar in Southern California and opened fire on people line dancing, killing at least 12 before he was found dead at the scene, authorities said.

Helus had been at the department for nearly three decades, and was planning to retire within the next year, Ventura County Sheriff Geoff Dean said, choking back tears.

"Ron ... gave his all and tonight, he died a hero because he went in to save lives," Dean said.

The suspect, who has not been identified, was found dead inside the bar, Dean said. He said it's not known whether there's a terrorism link.

'He was shooting everything'
Witnesses described a man cloaked in black and wearing glasses as he walked onto a dance floor filled with people.

"I started hearing these big pops. Pop, pop, pop. There was probably three or four, I hit the ground," John Hedge, at the bar with his stepfather, told CNN affiliate KABC.

"This guy just came out of nowhere and came out with a gun and shot people in Thousand Oaks, California," Harrah said. "And that's what's really blowing my mind, it's a really safe area."

The gunfire started during line dancing, witnesses said. People dropped to the floor and hid behind bar stools in stunned silence. Others jumped over chairs and broke windows to get out.

When deputies arrived at the scene three minutes after the first 911 call, shots were still being fired, authorities said.

The bar is near several colleges, and is a popular spot for students Wednesday nights. The Western-style bar hosts theme nights such as country, salsa and swing dancing.

On Wednesday night, students gathered for college country night between 9 p.m. and 2 a.m., according to the bar's website.

"I heard a gunshot, I turned around and I saw him shoot a couple more times," student Teylor Whittler told KABC.

"Within a split second, everybody yelled 'get down,' " she said.

People "dog-piled on top of each other" trying to hide in silence, she said. Some men ran toward them and said the gunman was coming. As they escaped through the bar's back door, she heard a second round of shots.

There was no screaming, she said -- just gunfire and stampeding crowds.

Nick Steinwender, who is part of the university's student government, said his friends were inside the bar when the shooting started.

"It was chaos, people jumping out of windows, hopping over gates and just trying to get out," he told the affiliate. "From what I heard, the gunman started shooting at the front desk. ... Students were hiding in the attics, bathrooms and stuff like that."

Pepperdine University said some of its students were at the bar, and it's working to identify them.

"The University offers its deepest condolences and is praying for everyone involved in tonight's tragic events," it tweeted.

Thousand Oaks is in Ventura County, about 40 miles from downtown Los Angeles. The city "is considered one of the safest cities in the country," according to Mayor Andy Fox.

"We are consistently ranked one of the highest with respect to the lowest crime rate per capita. We're proud of that," Fox said.

"The reality is that these types of incidents can happen really at any place, at any time, even in communities that are considered extremely safe."-NBC