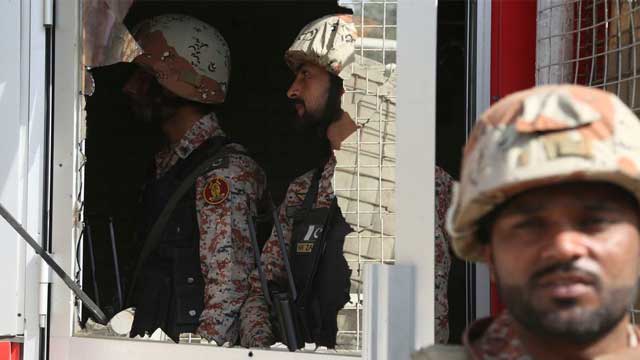 Karachi, Nov 23 (Just News): Gunmen have killed at least four people in an attack on the Chinese consulate in the Pakistani port city of Karachi.

Gunshots were heard at about 09:30 local time (04:30 GMT) outside the consulate in the upmarket Clifton area. Police shot dead three attackers.

Separatist militants who oppose Chinese investment projects in western Pakistan say they carried out the attack.

In another incident on Friday, at least 20 people were killed in a bomb attack in north-west Pakistan.

The blast occurred in a mostly Shia neighbourhood in Orakzai district. Police say a suicide bomber on a motorbike drove into a crowded marketplace.

Pakistan's Shia minority has often been targeted by Sunni extremists.

What happened in Karachi?

Three gunmen tried to enter the consulate but were stopped by security guards at a checkpoint, reports said. Two of those killed in the attack were police officers.

Eyewitnesses reported seeing a blast, and local TV channels broadcast images of a plume of smoke. There is a heavy police presence in the area which has been cordoned off.

All the staff inside the consulate are safe, China said. The Foreign Ministry in Beijing called for extra measures to protect Chinese citizens in Pakistan.

"At the same time we mourn the deaths of the Pakistani police and think of their families at this time," a spokesman said.

A separatist group, the Balochistan Liberation Army, said it carried out the attack. It is one of a number of separatist groups operating in the restive province, which has seen a long running nationalist insurgency.

"We have been seeing the Chinese as an oppressor, along with Pakistani forces," a spokesman for the group told the AFP news agency.

Over the years construction projects and Chinese workers in Balochistan have been repeatedly targeted by militants but this is one of the most prominent such attacks to date.