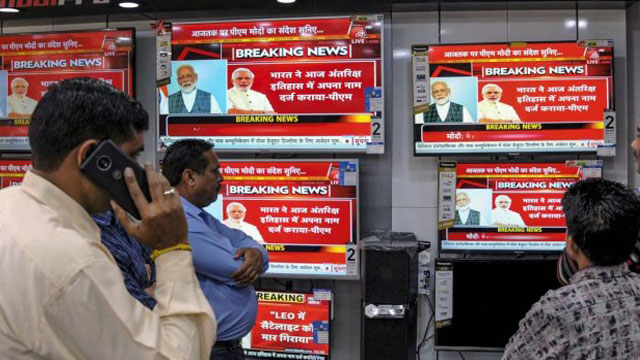 The acting US defence secretary has warned that the testing of anti-satellite (ASAT) weapons can create a "mess" in space after India destroyed one of its own satellites on Wednesday.

Patrick Shanahan said the US was still studying the Indian test, which Delhi insisted it carried out in low-earth orbit to not leave space debris.

India is the fourth country to have carried out an ASAT test.

China provoked international alarm with a similar test in 2007.

"My message would be: we all live in space, let's not make it a mess. Space should be a place where we can conduct business. Space is a place where people should have the freedom to operate," Mr Shanahan told reporters after India's test.

Debris from such tests can harm civilian and military satellite operations, and collide with other objects in space. But India said that it had intentionally carried out its 'Mission Shakti' test in the lower atmosphere - at an altitude of 300km (186 miles) - to ensure that there was no debris and that whatever was left would "decay and fall back onto the earth within weeks".

Some experts have cast doubt on this claim, saying that the path of debris cannot be controlled. The US military is monitoring more than 250 pieces of debris from the Indian test, Reuters news agency quoted a Pentagon spokesman as saying. The US carried out its first ASAT test in 1959.

China's 2007 test - which destroyed a defunct weather satellite at an altitude of 865km - left a large debris cloud in orbit.

Media captionIs India's prime minister right when he calls his country a space superpower?
Nasa has also warned of the risk of debris following the Indian test.

"Some people like to test anti-satellite capabilities intentionally and create orbital debris fields that we today are still dealing with," the US space agency's chief Jim Bridenstine told Congress on Wednesday.

"And those same countries come to us for space situational awareness, because of the debris field that they themselves created," he said.

In 2012, the then head of the Indian Defence Research and Development Organisation (DRDO) said that while India had "all the building blocks" for an ASAT weapon it did not want to test the system by destroying a satellite "because of the risk of space debris affecting other satellites".

Indian Prime Minister Narendra Modi announced the ASAT test in an unexpected national address on Wednesday, saying India had "established itself as a global space power".

Arms control advocates have expressed concern about the increasing militarisation of space. ASAT technology would allow India to take out the satellites of enemy powers in any conflict, and the test is likely to fuel the growing regional rivalry between India and China.

India's foreign ministry characterised the test as peaceful and said it had "no intention of entering into an arms race in outer space".

The announcement has enraged opposition parties, which have accused Mr Modi of using the test as an electoral stunt. Indians will begin voting in national elections on 11 April.

The Election Commission has announced it will investigate whether Mr Modi breached election rules, saying it had received complaints.-BBC