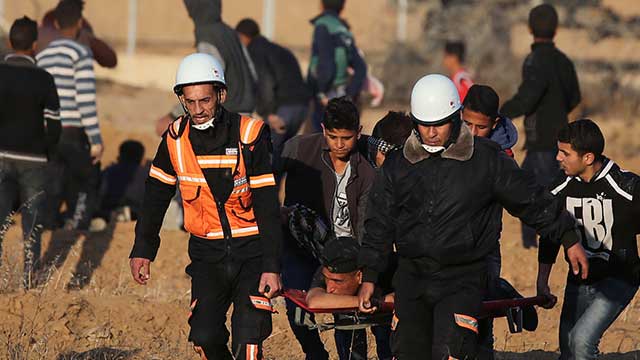 Israel on Friday struck Hamas targets in the Gaza Strip with tank and aircraft fire after troops were shot at on the Israeli side of the border, the army said.

The Israeli military said in a statement that "no injuries to soldiers were reported" after its troops came under fire.

They said there were no reports of Palestinian casualties.

Palestinians in Gaza have for more than a year gathered at least weekly along the border for often-violent protests, calling on Israel to end its blockade of the enclave.

The Israeli statement did not say if there were mass protests taking place at the time of Friday's incident.

The Palestinian health ministry in Gaza later said in a statement that 15 people were wounded by Israeli fire during border demonstrations, including "two paramedics and one journalist".

It gave no further information.

At least 264 Palestinians in Gaza have been killed by Israeli forces since the protests began.

The majority were killed during clashes, with others hit by tank fire or air strikes.

Two Israeli soldiers have been killed over the same period.

Hamas on Friday called on the UN to speed up a plan to funnel Qatari aid into the Palestinian enclave, part of an Egyptian-brokered truce with Israel.

After a severe flare-up between Israel and Hamas last month the ceasefire was hammered out amid fears of escalation.

Hamas said the truce would see Israel ease its crippling blockade of the strip in exchange for quiet.

Israel has not publicly commented on the reported agreement.

Among measures to help Gazans was a plan to resume blocked aid from Qatar through a UN cash for work programmes.

In November, the Gulf state, which is a long-time Hamas ally, committed to around $15 million a month in aid over six months.

Part of the funds were originally used to pay salaries of Hamas employees, but this was stopped after political opposition in Israel.

Khalil al-Haya, deputy head of the Hamas political bureau in Gaza, told AFP Friday that the alternative plan was stalled at the UN.

"The Qatari funds exist and the funds allocated by the World Bank for the cash for work programmes exist," he said.

"But the pace of the implementation of the United Nations mechanisms is slow," he said, adding an appeal to UN envoy Nickolay Mladenov.

"We call on the United Nations and Mr Mladenov to accelerate the implementation."

Israel, which has fought three wars with Hamas, has blockaded the enclave for more than a decade, and Egypt often closes Gaza's only other gateway to the outside world.

On April 1 Israel expanded the fishing zone around Gaza, increasing it in one area to the largest distance in years, in what Hamas officials said was the first step in implementing its "understandings" with the Jewish state.

"The understandings are in place," al-Haya said."Some of them are going well, such as fishing."-AFP