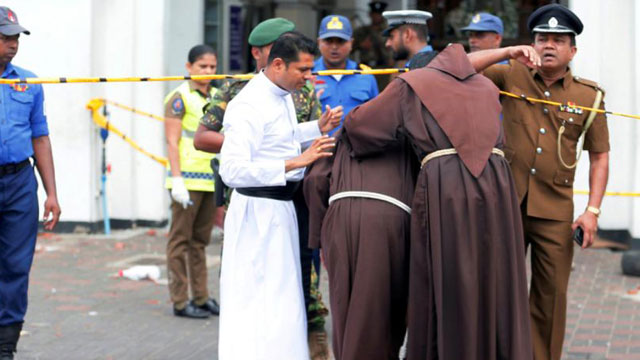 Sri Lankan President Maithripala Sirisena has called upon the people to remain calm and cooperate with the authorities in the ongoing investigations following today’s explosions in the country that left over a hundred people dead and several hundred others injured.

Expressing his shock at the explosions, President Sirisena said in a special statement that he has issued directives to the law enforcers – including police and the Special Task Force – to carry out investigation into the incident and take action against those found involved, reports The Straits Times and Times Online.

Meanwhile, Prime Minister Ranil Wickremesinghe called a national security council meeting at his home for later in the day.

In just one church, St Sebastian's in Katuwapitiya, north of Colombo, more than 50 people had been killed, a police official told Reuters, with pictures showing bodies on the ground, blood on the pews and a destroyed roof.

Media reported 25 people were also killed in an attack on a church in Batticaloa in Eastern Province.

The three hotels hit were the Shangri-La Colombo, Kingsbury Hotel and Cinnamon Grand Colombo. It was unclear whether there were any casualties in the hotels.

Nine foreigners were among the dead, the officials said.

There were no immediate claims of responsibility for the attacks in a country which was at war for decades with Tamil separatists until 2009 during which bomb blasts in the capital were common.