‘No one can dry our tears today’ 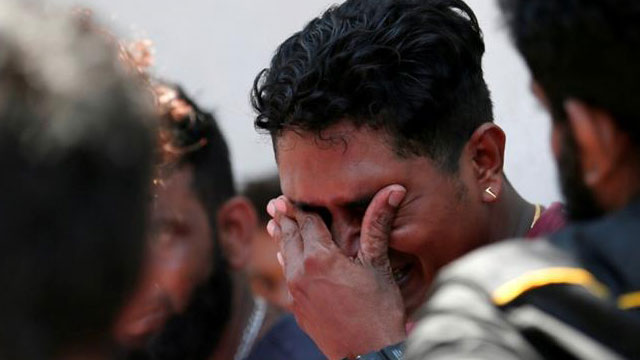 The first blast was reported at St Anthony's Shrine, an historic Roman Catholic church in the capital, Colombo. The other two occurred at St Sebastian Catholic Church in Negombo, a majority Catholic town north of Colombo.

A few minutes after the second explosion, blasts ripped through three high-end hotels in the capital - the Cinnamon Grand, the Shangri-La, and the Kingsbury.

Salahuddin lost his uncle Mohamed Rishard, 43, at the Shangri-La hotel.

"He was my mentor, my guardian. It is a huge loss for us," he told Al Jazeera.

Rishard, the owner of the automobile dealership Exotic Cars, left behind his wife, three daughters - Lisa Hyatt,18, Lina Ammani, 16, Liya Marian,15 - and a son, Mohamed Sulaiman, who is 11 years old.

He started his business in 2010 and since then has seen success as it flourished across the country.

"He started his business from scratch, he was a self-made man and always wanted to help others who were in need. He was a mentor to many," Salahuddin said.

Rishard's body was identified in Colombo's hospital a few hours after the blasts. His funeral prayers will be held on Monday morning. According to Salahuddin, Rishard went to the gym at the Shangri-La hotel and was killed at the restaurant serving breakfast.

"His wife is devastated but his daughter is keeping strong, she is very strong. But no one can dry our tears today."

No immediate claim of responsibility was made for the attack in the country. More than a dozen people have been arrested in connection with the blasts and the government declared a curfew in Colombo, blocking access to social media and messaging sites, including Facebook and WhatsApp to prevent misinformation and rumours.

"The streets are very quiet, no one is going out. I was very close to the blast when it happened," Saima Saleem, a Colombo resident, told Al Jazeera.

"We ran to take cover and the closest place was my husband's friend's house, so we are here for the moment until the curfew is lifted. We are all in shock, my kids are scared and we are very worried for our friends and family across the country."

Yasmin Chiristina Rodrigo, 31, returned home from Australia for a brief Easter holiday with her family. She was at St Anthony's Shrine in Colombo to attend morning mass at the famous church.

"I was seated in one of the middle rows and heard a sudden noise. I felt numb as small pieces of brick and soot-covered my body. I held on to my brother's hand and tried to scramble out of the church as panic struck the entire congregation. Suddenly there were loud screams and weeping," Yasmina told Al Jazeera.

"For minutes, I could not understand that the church had suffered a massive attack. I managed to get out of the pew, I saw a pile of people lying on the floor, soaked in blood and soot."

Ashan, who asked for his real name not be used for security reasons, was among the first responders when an explosion took place at St Sebastian Church in Negombo.

The 35-year-old said he was late to go to church but his family went before him and were present at the time of the attack.

"I just entered the church compound and the noise shook me. I saw a pool of blood, a mass of entangled bodies and people trying to scramble out of the devastated place," Ashan told Al Jazeera.

"Two of my family members were injured and are currently being treated at the Negombo District Hospital.

"I rushed and tried to assist those who were trying to get the people out of the church. The police arrived almost immediately," he said.

"I learned with sadness and pain of the news of the grave attacks, that precisely today, Easter, brought mourning and pain to churches and other places where people were gathered in Sri Lanka," he told tens of thousands of people in St Peter's Square.

The attack is called the worst in Sri Lanka since the end of the 27-year civil war, which claimed as many as 100,000 lives.

The Tamil Tigers, a rebel group from the ethnic Tamil minority, sought independence from the Buddhist-majority country but were defeated by the government in 2009.

Three-quarters of the 23 million people in Sri Lanka are ethnic Sinhalese, followed by the second-largest ethnic group, the Tamils, who make up more than 15 percent of the population. Muslims represent about 10 percent and Christians about six percent.

"It will be very difficult for the people of this country to recover from this mindless terrorism," Naushad Hameed, a non-resident in Sri Lanka, told Al Jazeera.

"But we all stand united."-Al Jazeera