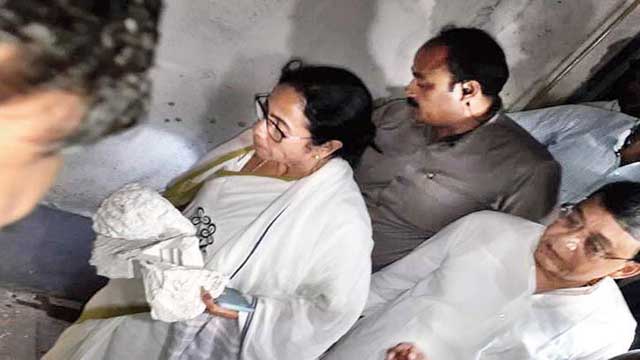 West Bengal Chief Minister Mamata Banerjee and other leaders of her party, Trinamool Congress, have changed their respective profile pictures on Twitter to Ishwarchandra Bidyasagar’s image, in protest against vandalism at a college in Kolkata.

A bust of the 19th-century social reformer was vandalised allegedly by Bharatiya Janata Party (BJP) workers during clashes at party chief Amit Shah’s rally in Kolkata on Tuesday, reports www.indiatvnews.com.

Ishwarchandra Bidyasagar had been a key figure in the Bengal renaissance. His statue, at a college named after him, was ransacked in the clashes that ensued between the BJP and TMC workers.

In response to the vandalism, Mamata Banerjee said, ‘I do not have words to condemn the incident. I am myself ashamed... that, as people of Bengal, we cannot respect Ishwarchandra Bidyasagar because of these BJP goons. These leaders will be leaders of the nation ? Those who cannot respect icons?’

Mamata Banerjee added she had never seen such political violence in Kolkata. She said an inquiry would be initiated.‘It is a very unfortunate incident and an entire college was vandalised. A bust of Iswarchandra Bidyasagar was broken. I have kept broken parts of the bust where the original statue was there. I have never seen such political violence in Kolkata,’ Mamata said, after visiting the college.

She accused the BJP of bringing ‘miscreants’ from other states like Bihar, Rajasthan and spending crores of rupees to put up cut-outs for the road show.

‘Does Amit Shah have any idea about the University of Calcutta that is our pride? Who is he? Can’t they stage protest demonstrations against him? Many people protest against me by putting up posters. I do not mind. In a democratic framework why have the BJP’s goons attacked Bidyasagar College?,’ Banerjee asked.

She also accused the BJP of circulating a ‘fake’ press statement alleging the Trinamool organised the violence.

Kolkata Police Commissioner Rajesh Kumar said, ‘No one involved in the attacks would be spared. More than 100 persons have been arrested. We will examine the incidents.’

He tweeted, ‘BJP-RSS think nothing of when they vandalise the historic Bidyasagar College, break Bidyasagar statue. This is their advocacy of India’s civilisational heritage? Attacking knowledge is central to getting their poisonous project going. Bengal will reject the destruction they offer.’