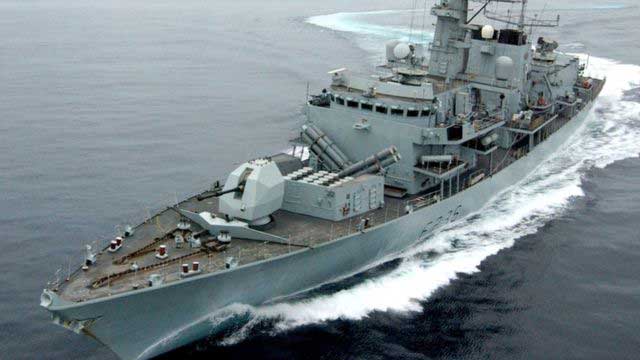 The UK has raised the threat to British shipping in Iranian waters in the Gulf to the highest level.

The step was taken on Tuesday, amid growing tensions in the region.

On Wednesday, Iranian boats tried to impede a British oil tanker in the region - before being driven off by a Royal Navy ship, the Ministry of Defence said.

Iran had threatened to retaliate for the seizure of one of its own tankers, but denied any attempted seizure.

The Department for Transport said it regularly provided security advice to UK ships in high-risk areas.

Boats believed to belong to Iran's Islamic Revolution Guard Corps (IRGC) approached the British Heritage tanker and tried to bring it to a halt as it was moving out of the Gulf into the Strait of Hormuz.

HMS Montrose, a British frigate shadowing the BP-owned tanker, was forced to move between the three boats and the ship, a Ministry of Defence spokesman said.

He described the Iranians' actions as "contrary to international law".

Guns on HMS Montrose were trained on the Iranian boats as they were ordered to back off, US media reported. The boats heeded the warning and no shots were fired.

Last week, British Royal Marines helped the authorities in Gibraltar seize an Iranian tanker because of evidence it was carrying oil to Syria in breach of EU sanctions.

A spokesman for the Royal Gibraltar Police said they had arrested the captain and chief officer of the Iranian tanker on Thursday, on suspicion of breaching EU sanctions, but neither had been charged. -BBC