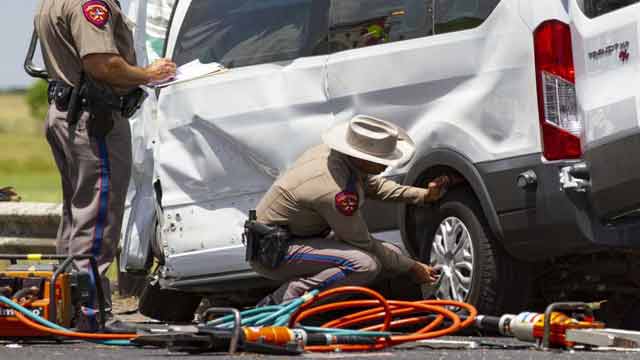 Authorities say five people have been killed and seven injured in a three-vehicle accident in South Texas.

The Department of Public Safety says the crash happened around 11 a.m. Saturday on U.S. 59, 5 miles (8 kilometers) northeast of Victoria.

Sgt. Ruben San Miguel says investigators are trying to determine why a northbound van hit the left rear of a northbound semi pulling a flatbed trailer. The van then struck a southbound pickup truck.

Five people in the van died at the scene — the female driver, two men and two children. Five others in the van were injured.

The pickup driver and a passenger were hospitalized in serious but stable condition. The driver of the semi wasn't hurt.

DPS says visibility was clear and the road was dry.