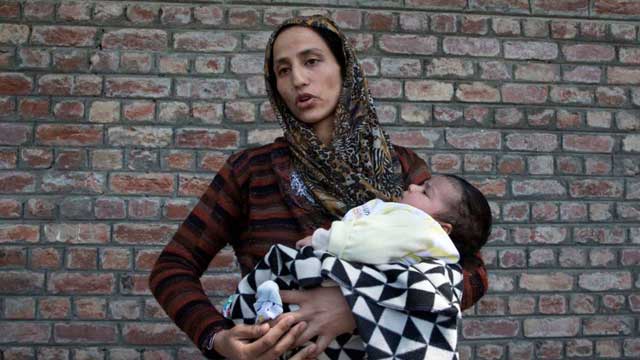 At least 2,300 people, mostly young men, have been detained in Indian-administered Kashmir during a security lockdown and communications blackout imposed to curtail unrest after New Delhi stripped the disputed region of statehood, according to top Kashmir police and arrest statistics reviewed by The Associated Press.

Those arrested include anti-India protesters as well as pro-India Kashmiri leaders who have been held in jails and other makeshift facilities, according to three police officials. The officials have access to all police records but spoke on the condition of anonymity because they weren't authorized to talk to reporters and feared reprisals from superiors.

Thousands of Indian troops have been sent into the Kashmir Valley, already one of the world's most militarized regions, to man checkpoints. Telephone communications, cellphone coverage, broadband internet and cable TV services were cut, although some have been gradually restored in places.

Kashmiris have staged protests and clashed with police since the crackdown, with about 300 demonstrations against India's tighter control over Kashmir, the three officials said.

One of the officials said most of the arrests have been in Srinagar, Kashmir's main city and the heart of a 30-year-old movement to oust Hindu-majority India from Muslim-majority Kashmir so that it can exist independently or be merged with Pakistan.

Both India and Pakistan claim the disputed territory of Kashmir in its entirety, but each controls only part of it. Kashmir's special status was instituted shortly after India achieved independence from Britain in 1947.

The official spokesman in Jammu and Kashmir, Rohit Kansal, has repeatedly refused to give any details about arrests and detentions, saying only that they have been made to prevent anti-India protests and clashes in the region. He declined questions about specific arrests.

Nearly 100 people have been arrested under the Public Safety Act, the arrest statistics showed. The law permits detaining people for up to two years without trial.

At least 70 civilians and 20 police and soldiers have been treated at three hospitals in Srinagar for injuries stemming from the clashes, the three officers said.

Moses Dhinakaran, a spokesman for the Central Reserve Police Force, which now holds jurisdiction in Kashmir, said he didn't know how many people had been detained because his agency has "no direct role."

Families crowded outside police stations Tuesday waiting to appeal for the release of their sons, husbands and other relatives.

At least three dozen men and women along with their children sat on the street outside a Srinagar police station waiting to hear about 22 young men and teenage boys who they said had been detained in a nighttime raid in one neighborhood.

Residents say police and soldiers carry out the raids to suppress dissent.

Ali Mohammed Rah said police and soldiers burst into his home and dragged his two sons, age 14 and 16, from their beds.

"They forced their entry, trained their guns at us while ordering us not to raise any alarm," Rah said.

He said his wife, who is a heart patient, "pleaded with them to let our boys go but they whisked them away. My wife collapsed and is now in a hospital."

A young woman named Ulfat, who is still recovering from giving birth, said her husband was arrested at their home about 2 a.m.

"Who will provide our family with food and medicine? Where should I go with my baby?" she said, her newborn daughter in her lap.

Raj Begum said her 24-year-old son was taken away barefoot and in shorts.

"Soldiers hit me with a wooden plank as I tried to resist my son's arrest," she said. Her husband, Abdul Aziz, displayed a bag of shoes and clothes for their son.

"Can they at least take these clothes?" he said.

In the Soura area of Srinagar, which has seen some of the biggest protests and clashes, residents have barricaded the neighborhood by digging trenches, laying barbed wire and erecting poles and corrugated tin sheets to stop the raids.

The residents, carrying axes and sticks, take turns on night patrol and have also distributed stones at street corners to defend against the raids.

Ali Mohammed, 52, said troops had made two unsuccessful attempts to raid the neighborhood.

In Washington, a senior State Department official the U.S. wants to see India restore human rights and basic freedoms for all Kashmiris, including the release of detainees, and then looks forward to a return to political normalcy. The official was not authorized to discuss diplomatic discussions publicly and spoke on condition of anonymity.

Kashmir has seen mass arrests and lockdowns before. The partition of the territory left India in control of most of Kashmir, and Pakistan and China in charge of other parts of the territory. India has often tried to suppress uprisings, including a bloody armed rebellion in 1989. About 70,000 people have been killed since that uprising and a subsequent Indian military crackdown.