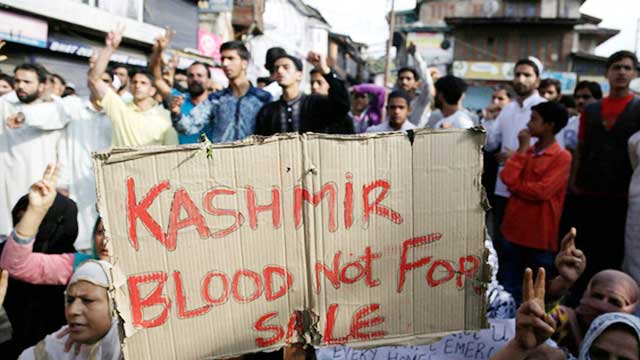 Imprisoned leaders in Indian Kashmir have urged people to defy a ban and join a mass march after Friday prayers this week, the first such call since the federal government revoked the region's autonomy, stirring anger in the region and beyond.

Hundreds of political leaders and activists, many of them separatists seeking Kashmir's secession from India, have been incarcerated and the appeal to the public came through posters that appeared overnight in the region's main city of Srinagar.

“Every person, young and old, men and women, should march after Friday prayers,” the Joint Resistance Leadership, which represents all major separatist groups, said on one poster.

The public must march to the office of the UN Military Observer group in Srinagar, which was set up in 1949 after the first war between India and Pakistan over Kashmir.

Prime minister Narendra Modi's government revoked Muslim majority Kashmir's special status under which people from the rest of India could not buy property or compete for government jobs and college places.

Modi's ruling party had long sought an end to Kashmir's special status, seeing it as appeasement of minorities and a barrier to its integration with the rest of the country.

But critics said the withdrawal of its legal autonomy would cause further alienation and fuel the 30-year revolt in Indian-administered Kashmir, in which at least 50,000 people have been killed.

On Wednesday, a gunbattle between security forces and militants erupted in Baramulla in northern Kashmir in which a policeman and a rebel were killed, police said. It was the first clash since the new measures were announced.

Crowds have demonstrated frequently in Srinagar despite a ban on public gatherings and the severe restriction of phone and internet services.

One of the posters said the federal government planned to change the demographics of Kashmir by flooding it with outsiders and urged clerics to speak about these fears during their sermons on Friday.

Kashmiri protesters stand at a barricade to block the entrance of a neighbourhood, during restrictions after the scrapping of the special constitutional status for Kashmir by the government, in Srinagar, 19 August, 2019. Photo: ReutersIn the Soura part of Srinagar, where protests have flared, some residents said that they would try to join the protests.

“We will try, people will try to go,” said one middle-aged man said, who declined to be identified, after reading a poster pasted at a crossroads near the area’s main mosque.

In the Zainakadal area of Srinagar's old quarter, where all shops were shuttered, and few people roamed, residents said they hadn’t heard of the call for protests.

"If our leaders call, we will come out," said a man said, who also declined to be identified.

“There will be protests, our protests won’t stop.”

On Tuesday, one person was critically wounded when security forces fired pellets in Srinagar's Fatehkadal area during some stone-throwing by protesters, a senior police official and government official said.

“He is on a ventilator,” the government official said of the wounded man.-Reuters