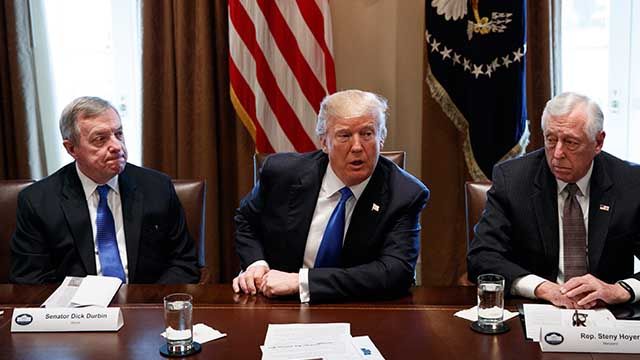 “Let me say they're wrong. I can tell you explicitly they are wrong,” the Illinois Democrat told CNN's Jake Tapper in an exclusive sit-down interview. “And let me also say, is that their defense, that S-House is acceptable, S-Hole he would never say? Come on. To think that the President of the United States would refer to any country on Earth as an S-House country, for goodness' sakes, what does that say?”

Perdue told ABC on Sunday that to say Trump used the word "shithole" would be a "gross misrepresentation."
On Friday, Cotton and Perdue issued a statement saying they did not recall the "shithole" comment.
No one disputes that the President expressed a preference for immigrants from places like Norway over places like Haiti, Central America and Africa.

Durbin also told Tapper the last two weeks have been "bizarre," recalling the recently televised meeting between bipartisan members of Congress and Trump, in which Trump agreed to go forward with a permanent legislative solution for the Deferred Action for Childhood Arrivals program as well as comprehensive immigration reform.

"Then we called him two days later, (Republican) Senator (Lindsey) Graham and I, and said we've done it. We've met your criteria. We have a bipartisan bill. We're ready to go. And then to be called into the President's office to explain it to him and find that we've been sandbagged," Durbin added.

He said White House chief of staff John Kelly and White House senior adviser Stephen Miller brought in five other members of Congress "to refute any assertions ... that this was good policy."

Durbin said Graham pushed back on Trump for his vulgar remark during the meeting.

"(H)e said 'My family was from one of those S-Hole countries.' He used the word himself," Durbin continued, adding that Graham said, "'They came here with limited training, limited experience. They made a life, they started a business and they gave me a chance. That's what America is all about.'"

Trump's "shithole" remark has had implications in Washington and abroad. On Capitol Hill, Democrats and some Republicans denounced Trump's remark as they've tried to reach a deal on immigration, which could be essential to avoiding a government shutdown later this week.

And according to the State Department, several countries have summoned US diplomats to the respective nations they reside in to answer for Trump's comment, with more expected this week.