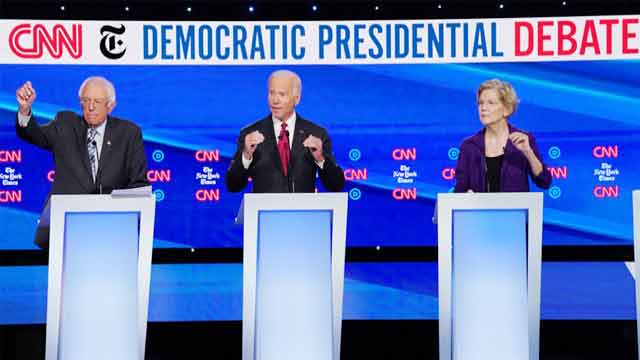 Democratic White House hopeful united in searing condemnation of United States president Donald Trump during their fourth debate Tuesday, saying the president has broken the law, abused his power, and deserves to be impeached.

From the opening moments, most of the dozen candidates on stage launched fierce broadsides against Trump over the Ukrainian scandal at the heart of the impeachment inquiry.

‘The impeachment must go forward,’ said senator Elizabeth Warren, who is neck and neck with former vice-president Joe Biden at the head of the 2020 nominations race.

‘Impeachment is the way that we establish that this man will not be permitted to break the law over and over without consequences,’ she thundered.

But Warren, and others, warned the goal was not just to sanction Trump, but to restore the dignity of the office.

Washington’s impeachment brawl has dominated US politics for weeks, cantered on Trump’s effort to press Ukraine to dig up dirt on his 2020 rival Biden — and for a 10 solid minutes Trump was the focus of attacks.

Biden made clear he believes Trump should be impeached — saying lawmakers ‘have no choice but to move’ — but he also pushed back hard on Trump’s charge that he had intervened in Ukraine to protect his son Hunter.

‘My son did nothing wrong. I did nothing wrong,’ Biden said, when asked about his son’s employment with a Ukrainian company, which even some Democrats say held the appearance of a conflict of interest.

‘I carried out the policy of the United States in rooting out corruption in Ukraine. That’s what we should be focusing on,’ Biden said.

The Democrats were facing off in an extraordinary moment.

The progressive Warren is on the rise and challenging Biden for frontrunner status, while liberal Sanders is under pressure to project fortitude two weeks after he was sidelined by a mild heart attack.

Warren faced stiff blowback from moderates Amy Klobuchar and Pete Buttigieg who criticized her for declining to come clean on how much her ‘Medicare for All’ health plan would cost.

‘The difference between a plan and a pipe dream is something that you can actually get done,’ said Klobuchar, a senator from Minnesota.

Biden has begun criticising the president more forcefully, perhaps because he stands to lose the most in the clash.-AFP