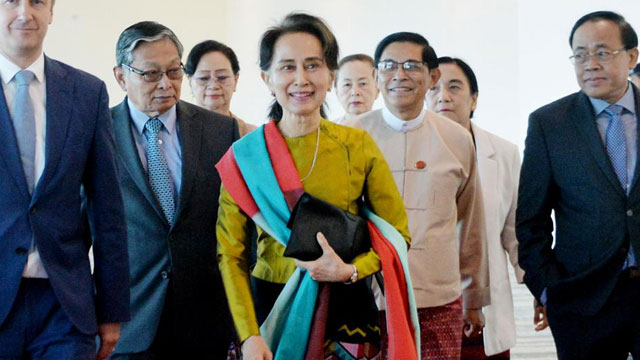 Human rights campaigners supporting Myanmar’s Rohingya Muslim minority on Monday called for a global boycott of the country, a day before genocide hearings begin at the International Court of Justice in The Hague.

Myanmar leader and Nobel Peace prize laureate Aung San Suu Kyi, who arrived in the Netherlands on Sunday, will defend her country’s record during three days of hearings initiated after a lawsuit was filed by Gambia in November.

Suu Kyi’s office posted a picture of her arrival at Amsterdam’s Schiphol airport, where she was greeted by the ambassador to the Netherlands and then headed to The Hague, where the tribunal, also known as the World Court, is located.

Several demonstrations are planned in coming days in the Dutch city by Rohingya survivor groups, as well as by government supporters.

Gambia, a tiny, mainly Muslim West African country, filed the suit in which the Buddhist-majority Myanmar is accused ofgenocide, the most serious international crime, against itsRohingya Muslim minority.

More than 730,000 Rohingya fled Myanmar in 2017 after a military-led crackdown. The United Nations has said the campaign was executed with “genocidal intent” and included mass killings and rape.

Myanmar authorities have strongly disputed that conclusion, categorizing the military operation as a legitimate counterterrorism response to attacks by Rohingya militants that killed 13 members of the security forces.

During three days of hearings, Gambia’s legal team will ask the 16-member panel of U.N judges at the International Criminal Court of Justice to impose “provisional measures” to protect the Rohingya before the case can be heard in full.

Suu Kyi’s office said last month that she would lead her country’s team in The Hague to “defend the national interest”.

The Free Rohingya Coalition said in a statement it was starting the “Boycott Myanmar Campaign” with 30 organisations in 10 countries. It called on “corporations, foreign investors, professional and cultural organizations to sever their institutional ties with Myanmar”.

It said the boycott was intended to “to bring to bear economic, cultural, diplomatic and political pressure on Myanmar’s coalition government of Aung San Suu Kyi and the military”.

In the sprawling Bangladeshi camps where they now live as refugees, some Rohingya said they were praying to see justice delivered. One man read aloud to a group from a newspaper article about the hearings.

“Once Aung San Suu Kyi was an icon of peace and we had huge expectations that things would change when she came to power,” said 65-year-old Nur Alam, who said his son was shot dead by soldiers during the crackdown.

“We prayed for her, but she has now become an icon of genocide... Shame on her.”

“The army killed my husband,” she said. “They raped me and torched my house, they stabbed my 6-year-old daughter in the head. Why did they kill our innocent people, our kids? Why did they torture and rape our women? We demand justice.”

Myanmar has previously denied almost all allegations made by refugees against its troops, including of mass rape, killings and arson, and promised to punish any soldiers involved in what it says were isolated cases of wrongdoing.

In Myitkyina, the capital of Kachin state in northern Myanmar near the border with China, hundreds of people marched in support of the Suu Kyi.

A mixed crowd, young and old, walked carrying posters saying “we stand with our leader” and wearing headbands with the slogan “we stand with Mother Suu”. More demonstrations are planned in the major cities Yangon and Mandalay when the hearings begin. -Reuters