Trump fires back at Schumer 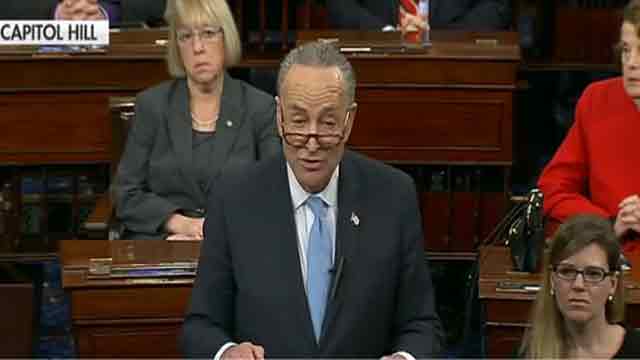 Washington, Jan 24 (Just News): The US President Donald Trump fired back Tuesday night at Senate Minority Leader Chuck Schumer for offering, then rescinding, a deal to support border wall funding in return for an immigration package that protects illegal immigrants brought to the U.S. as children.

"Cryin’ Chuck Schumer fully understands, especially after his humiliating defeat, that if there is no Wall, there is no DACA," the president tweeted around 11 p.m. EST. "We must have safety and security, together with a strong Military, for our great people!"

“He comes over here with a phony plan and a fake promise,” Gidley said, referring to Schumer, D-N.Y.

A Schumer aide confirmed to Fox News on Tuesday that the leader withdrew his offer of a boost in funding for the president’s proposed border wall. It was initially made during negotiations over the government spending bill with the president last Friday, the aide said.

Schumer’s office says he pulled the wall offer on Sunday.

But Gidley said they didn’t take the offer seriously, saying the Democrat offered less than one-tenth of what was needed to secure the border in his “bogus negotiation.” The administration wants $18 billion for a border wall.

“You can't rescind money you never really offered in the first place,” he said.

After a three-day government shutdown, Democrats agreed to re-open the government Monday after Republicans assured them the Senate would soon consider legislation that would protect the so-called Dreamers.

“In a bipartisan meeting here at the White House two weeks ago we outlined a path forward on four issues: serious border security, an end to chain migration, the cancellation of the outdated and unsafe visa lottery and a permanent solution to DACA,” Sanders said. “Unfortunately, the Flake-Graham-Durbin agreement does not meet these bench marks.”-Foxnews