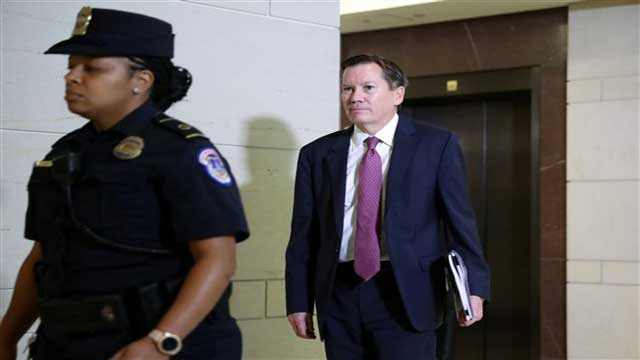 President Donald Trump has informed Congress that he is removing the inspector general who flagged the Ukraine whistleblower complaint.

“This is to advise that I am exercising my power as President to remove from office the Inspector General of the Intelligence Community,” the Trump letter to the leaders of the House and Senate intelligence committees says.

The letter also says "it is vital that I have the fullest confidence in the appointees serving as Inspectors General. That is no longer the case with regard to this Inspector General.”

The firing is to take effect 30 days from Friday, according to the letter.

News of the complaint and the fact it had been withheld from Congress touched off an inquiry and testimony that resulted in Trump's impeachment. Trump was acquitted by the Senate.

Michael Atkinson deemed the complaint an "urgent concern" that he was required by law to provide to the congressional intelligence committees.

But then-Acting Director of National Intelligence Joseph Maguirerefused to do so on the advice of the Justice Department, resulting in a standoff.

Trump was accused of abusing the power of his office for personal political gain and obstruction of Congress.

House Democrats said there was ample evidence that Trump had abused his power by pressuring Ukraine to announce investigations into former Vice President Joe Biden and his son while withholding almost $400 million in aid, and that he had obstructed Congress by refusing to release any documents related to his actions.

Two Congressional sources told Atkinson was informed Friday night that Trump had fired him, and he has been placed on administrative leave effective immediately.

The statute technically requires that both intelligence committees be notified by Trump 30 days before the effective date of the IG’s removal, and placing him on administrative leave is being viewed by Congress as a way to effectively circumvent this requirement and sideline him right away.

Atkinson is a Trump appointee who was confirmed by the Senate in 2018. He is a career Department of Justice prosecutor.

Rep. Adam Schiff, D-Calif., who chairs the House Intelligence Committee and who played a key role in the impeachment of Trump, called the president's move an attempt to "retaliate against those who dare to expose presidential wrongdoing."

"At a time when our country is dealing with a national emergency and needs people in the Intelligence Community to speak truth to power, the President’s dead of night decision puts our country and national security at even greater risk," Schiff said, referring to the coronavirus epidemic.

“Moreover, this retribution against a distinguished public servant for doing his job and informing Congress of an urgent and credible whistleblower complaint is a direct affront to the entire inspector general system," Schiff said in the statement. "It undermines the transparency and oversight the American people expect of their government, and in its absence will undoubtedly lead to even greater corruption in the Administration.”

Senate Minority Leader Chuck Schumer, D-N.Y., referred to the removal of Lt. Col. Alexander Vindman from his White House job in February after Trump was acquitted during the Senate trial. Vindman testified in the House impeachment inquiry.

Trump said in the letters to the chair and vice chairs of the Senate and House intelligence committees that he would submit to the Senate his nomination for a replacement at a later date.

"The work of the intelligence community has never been about loyalty to a single individual -- it’s about keeping us all safe from those who wish to do our country harm," Warner tweeted. "We should all be deeply disturbed by ongoing attempts to politicize the nation’s intelligence agencies."

Maguire, the acting director of national intelligence at the time of the complaint, has been replaced as acting director by Richard Grenell, who had been the U.S. ambassador to Germany. Trump made the announcement of the change in February. Source : NBC News