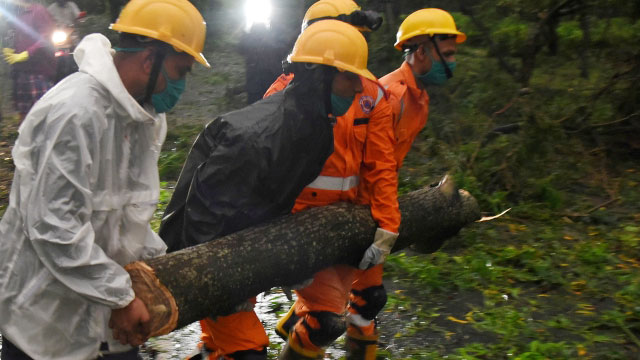 Super Cyclone Amphan, which had weakened into an "extremely severe" cyclonic storm has killed at least 12 persons and ravaged Kolkata and several parts of West Bengal as it left behind a trail of destruction by uprooting trees, destroying thousands of homes and swamping low-lying areas of the state.

Cyclone Amphan had weakened into a "very severe" cyclonic storm by late Wednesday evening while half of eye was over land. However, it was packed with enough force to pulverise coastal districts of Odisha and West Bengal where nearly 7 lakh people were evacuated from vulnerable areas and shifted to safety.

Meanwhile, senior state officials have said it was too early to estimate a toll on life or damage to property as the hardest hit areas were still not accessible.

This is the second pre-monsoon cyclone to hit India in two years and Cyclone Amphan, a Thai name that means sky, is said to be one of the worst to form over the Bay of Bengal in decades. Odisha was savaged by a super cyclone in 1999 that had claimed around 10,000 lives.

The cyclonic storm, which made a landfall in West Bengal on Wednesday afternoon caused severe damages in Kolkata, Howrah, Hooghly, North and South 24 Parganas districts and their nearby areas, with a wind speed ranging from 155 to 185 kmph, accompanied by heavy rainfall.

Heavy rains and huge gush of wind storms damaged the roofs of several buildings and uprooted a massive number of trees across Kolkata and its adjoining Howrah district.

According to late night reports, Amphan had destroyed over 5,000 houses in Minakhan, Haroa, Basirhat Hingalgunj and Hasnabad areas of North 24 Parganas district.

Most of the areas in Howrah and North 24 Parganas faced massive power cuts due to heavy rainfall. Roofs of thatched houses were blown away, electric poles got twisted and hundreds of trees broken and uprooted as a result of the strong winds during the cyclonic spell. There have been damages inside the state secretariat building Nabanna as well.

Meanwhile, the six-hour long cyclonic spell has flooded the tarmac, runways and hangars of the Kolkata airport and damaged the rood of the structure. All operations at the airport had been suspended till 5 am today.

West Bengal Chief Minister Mamata Banerjee, who has been monitoring the situation at state secretariat Nabanna since Tuesday night, said the impact of Amphan was "worse than coronavirus".

"We will ask the Centre to look at the extent of damages with a humane face. As per our initial estimates, 10-12 people have died. We feel the loss of lives could even surpass that caused by the Covid-19 pandemic," Banerjee said.

Cyclone Amphan also wreaked havoc in the coastal districts of Odisha as it triggered heavy rainfall, coupled with high-velocity winds while moving towards the West Bengal.

The government has received reports of two deaths from Bhadrak and Kendrapara districts due to the cyclone.

As of reports from today morning, the savage cyclone has further weakened into a cyclonic storm and lays centered over Bangladesh about 270 north-northeastwards of Kolkata with a wind speed of 27 kmph. It is very likely to continue to move north-northeastwards and weaken further into a deep depression during the next three hours and into a depression during subsequent six hours, the India Meteorological Department (IMD) has said.

It said that the Cyclone is now centred over Bangladesh and it will have no adverse impact over West Bengal and Odisha.-The Statesman/ Asia News Network