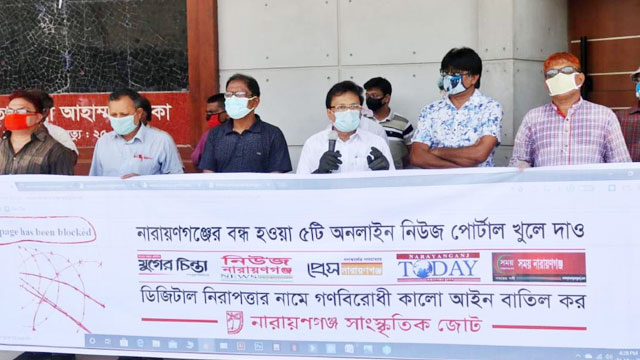 The demonstration took place in front of the Ali Ahmed Chunka Nagar Library and Auditorium building in Narayanganj city at around 11am.

The demonstrators said the websites of such local media houses as Daily Juger Chinta, News Narayanganj, Press Narayanganj, Narayanganj Today and one other outlet had not been accessible since May 14.

Protesters said the portals had been blocked without even a show cause notice being issued, an action they described as 'absolutely illegal.'

“On May 28, a show cause notice was served on the News Narayanganj, stating that one of its reports regarding the Narayanganj 300-bed hospital is completely 'false'. The notice further stated that legal action would be taken against the portal within 7 days if a satisfactory answer was not provided," said one of the protesters.

"The notice was served 14 days after the portals were blocked. There should be a definitive order of the legal action taken when a news portal is accused of providing misinformation. An investigation should be conducted first and action should be taken accordingly," he added

Another speaker at the protest said: "We have observed that the five websites were blocked after a meeting held on May 14 at the DC’s office. But this action was taken to safeguard those who are alleged to have indulged in land grabbing, murder, extortion and many other crimes."

The protesters urged the district's deputy commissioner to take action for the news portals to be reopened.

Journalists and cultural activists, taking part in the protest were: Bhabani Sankar Roy, president of the cultural union, Hafizul Islam, president of a district leftwing party, Moshtak Ahmed from Daily Juger Chinta and Sourav Hossain Siyam of Narayanganj Today and a few others