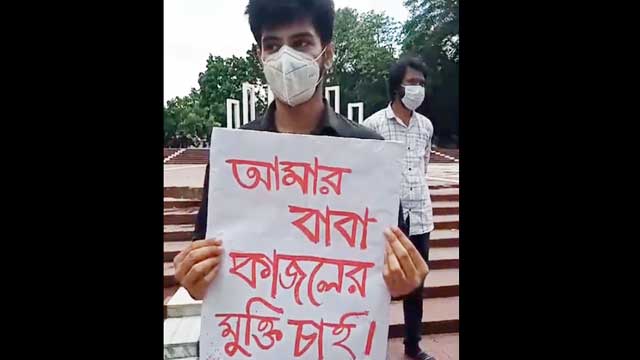 Human Rights Watch (HRW) slammed the Bangladesh government over the arrest of a schoolboy for allegedly defaming the prime minister in a social media post.

In a statement on Friday, the rights body said that arresting someone for criticizing the prime minister was a serious violation of free speech.

“Holding anyone under 18 violates international human rights law which prohibits detaining children except as a last resort,” it said.

However, Bangladesh authorities on Saturday arrested a 15-year-old for allegedly “defaming” Prime Minister Sheikh Hasina in a Facebook post.

The arrest was made under the vaguely worded Digital Security Act (DSA) which is being applied to make arbitrary arrests targeting anyone criticizing the ruling party.

The 15-year-old was arrested after a local ruling party politician said that the boy had “badmouthed … our mother-like leader” said police in Bhaluka, north of Dhaka.

The child was sent to a juvenile detention centre where police said: “He would spend time realizing his mistakes and correcting his character.”

Arresting someone for criticizing the prime minister is not only a serious violation of free speech, but holding anyone under 18 violates international human rights law prohibitions against detaining children except as a last resort. In addition, juvenile detention centers in Bangladesh are already crowded far beyond capacity and prone to unhygienic conditions, putting him at heightened risk of contracting Covid-19.

Because of the Covid-19 pandemic, the United Nations children’s fund, UNICEF, and the Alliance for Child Protection in Humanitarian Action have urged governments to institute a moratorium on new children entering detention facilities, release all children who can be safely released, and protect the health and well-being of children who must remain in detention.

In response to these concerns, Bangladesh authorities recently granted bail to nearly 500 children. But this is not enough. According to UNICEF, more than 1,000 children awaiting trial or sentenced for petty crimes in Bangladesh remain in three detention centers.

Prime Minister Sheikh Hasina should publicly direct the police not to arrest people for criticizing her or other government officials. She should order the release of all children held in juvenile detention facilities, prisons, and other detention centers who can safely be released. And she should certainly make sure that no child – or anyone else – is in custody for a Facebook post.