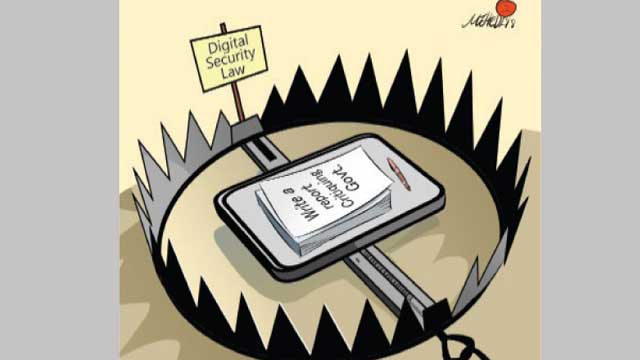 There has been a sharp rise in the cases under the Digital Security Act during the COVID-19 crisis as people are increasingly becoming critical about the government health mismanagement.

Unhappy people have, for quite some time, been expressing their reactions on Facebook against the government, its ministers for their ‘chaotic COVID-19 preparedness and response’.

Journalists, university teachers, rights activists, even a child, were charged and arrested under this law during the pandemic as they posted critical posts against the prime minister and ruling party people.

Rights activists view that the government and the incumbent party are increasingly becoming intolerant and using the act as a shield against criticism and to suppress the freedom of expression in the situation of the ‘chaotic COVID-19 preparedness and response’.

They complained that the police had been more pro-active in arresting the accused under the digital security act, even in carrying out drives in the middle of night.

Of late, writers and journalists have been targeted for reporting corruption and irregularity via news stories, cartoons or photographs on social media sites.

The number of cases filed under the ac was 1,189. Of the cases, 721 were field with police stations and 468 were filed with courts, showed the data.

A police officer said that they have also witnessed increase in the number of cases under the act.

Rights activist and jurist Shahdeen Malik said that this situation unfolded as the checks and balances in the state power structure weakened during this COVID-19 crisis, particularly as the High Court was not functioning and there was no checks on the government from the judiciary.

‘Clearly there have been failures on the part of the government in dealing with this pandemic and hence the government is desperate to suppress the popular criticism with the help of this law,’ he added.

London-based human rights organisation Article 19 recorded that at least 108 cases were filed under the act so far in this year accusing 204 people.

Seventy-six of these cases were filed in April, May and the first three weeks of June in which 125 people were accused, showed the data.

Cases were filed against more than 44 journalists, the data showed, under the act this year so far with the majority of the cases filed in May.

Human rights organisation Ain o Salish Kendra also recorded a surge in the digital security act cases during the pandemic in the country.

In a cruel incident recently, police arrested a 14-year-old schoolboy and sent him to the Juvenile Correction Centre in Gazipur after a local Juba League leader filed a case against him with Bhaluka Police Station under the DSA on charge of posting a defamatory status against the PM.

A teacher of Rajshahi University and another of Begum Rokeya University in Rangpur have also been arrested recently for their critical and satirical posts on the recently deceased Awami League leader and former health minister Mohammad Nasim on a social media platform.

Instead of investigating the 53-day disappearance of photojournalist Shafiqul Islam Kajol, police have shown him arrested in a DSA case on Tuesday and the court also rejected his bail plea.

Sirazul Islam Ratan, the Gaibandha upazila correspondent for Daily Manabzamin, was arrested from his house on May 26 in a case filed under the act by a transport owner after the journalist criticised a transport company on a social media platform for breaking lockdown restrictions.

In a much-discussed case under the act, 11 persons, including a number of journalists, writers and a cartoonist, were charged by the Rapid Action Battalion in May.

The police cyber security team said that some cases were lodged with respect to a flood of rumours about COVID-19 on Facebook and other social media platforms.

DMP deputy commissioner for cyber security AFM Al Kibria said that they were investigating some cases against the users posting defamatory remarks on some people and some making posts which might incite religious tension.

Rights activists, however, said that the government and ruling party leaders were abusing the law and were trying to silence criticism and hide their COVID-19 response failures.

A group of university teachers on Monday held a sit-in demonstration under the banner of University Teachers Network, Bangladesh where they demanded the immediate annulment of the DSA and the release of the people arrested pertaining to cases under the act for their comments or posts on Facebook.

Dhaka University international relations professor Tanzimuddin Khan, who took part in the demonstration, told New Age that the controversial act was conceived to have a curb on the criticism of the government.

Ruling party leaders, activists and some government officials were mainly using the act in their interest, he said. He alleged that the act was being used to limit the scopes of criticism of the government during this crisis as no actions were taken against the persons responsible for the mismanaged responses.

But, he noted, people who complained against the anomalies were arrested and abused.

Former chairman of the National Human Rights Commission Professor Mizanur Rahman believes that these cases suggest the undemocratic, authoritarian and intolerant attitude of the authorities.

Like in any crisis, he went on, people became critical of the poor management in combating the COVID-19 crisis too and they expressed their frustration on the social media.

Instead of taking actions against those responsible, the state was acting in an intolerant and authoritarian way by suppressing the people who criticised them, the law professor remarked.

When approached a few days earlier, police headquarters assistant inspector general for the media Sohel Rana told New Age that the police had an obligation to record any legally viable complaint.

‘The number of cases depends on the number of reporting and complaints lodged with police. All police actions are conducted based on the particular legal dictates promulgated by the state,’ he added.-New Age