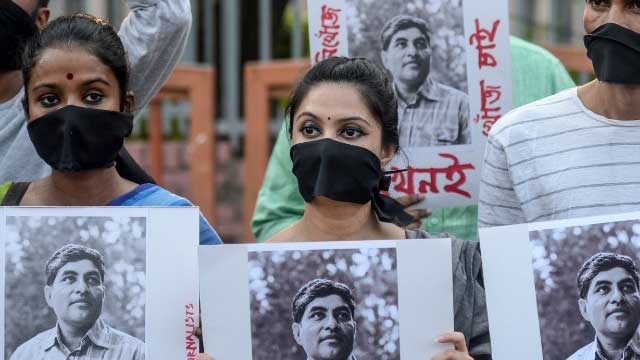 A virtual court in Dhaka today placed photojournalist Shafiqul Islam Kajol on a two-day remand in a case filed under the Digital Security Act.

Metropolitan Magistrate Debdash Chandra Adhikary passed remand order after a hearing through videoconferencing with the authorities of Keraniganj Central Jail.

During the hearing, the magistrate witnessed Kajol through virtual system and held the hearing on the 10-day remand prayer submitted by Sub-Inspector Mohammad Rassel Mollah of Detective Branch of Police and also investigation officer of the case.

In the remand prayer, SI Rassel said Kajol needs to be remanded to recover his Facebook account and arrest his accomplices.

Opposing the prosecution plea, defence lawyer Jyotirmoy Barua submitted a petition seeking bail along with cancellation of the remand prayer, adding that his client was implicated in the case as part of a conspiracy to harass him.

Moreover, his client has been in jail since his arrest on May 3 from Benapole. So, he appealed to the court to cancel the remand prayer and grant him bail, Barua added.

After hearing both sides, the magistrate rejected the bail petition and placed Kajol on a two-day remand for interrogation.

On June 23, Kajol was shown arrested in a case filed against him by ruling party lawmaker Saifuzzaman Shikhor from Magura-1 with Sher-e-Bangla Nagar Police Station.

The next day, another virtual court in Dhaka rejected Kajol's bail petition through videoconferencing in the case.

Another case was also filed with Kamrangir Char Police Station against Kajol under the same act.