ARTICLE 19 calls for release of journo Kajol at UNHRC 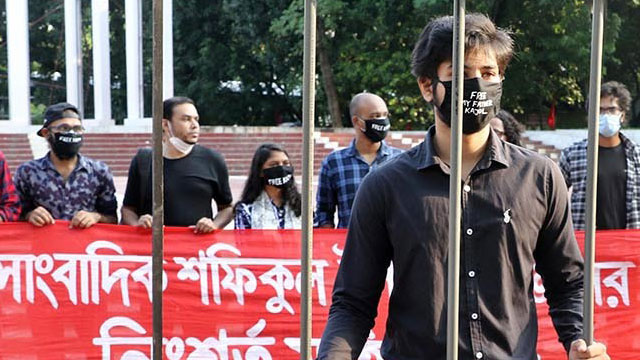 UK based human rights organization ARTICLE 19 have demanded the immediate release of Shafiqul Islam Kajol, photojournalist and editor of Pakshakal jailed under the Digital Security Act 2018, in an oral statement at the ongoing 45th session of the UN Human Rights Council.

ARTICLE 19 made the call during the general debate at the 45th regular session of the Human Rights Council in Geneva on Friday.

“In Bangladesh, violence against journalists is too often met with impunity. In March 2020, photojournalist and editor Shafiqul Islam Kajol suspiciously disappeared after being accused of defamation by a member of parliament,” ARTICLE 19 said in the statement.

“In May 2020, 53 days after his disappearance, Kajol was ‘found’ blindfolded and bound in a field and taken into custody where he remains in detention under criminal defamation charges. There is strong evidence to suggest that while he was missing, he was in the custody of security forces. We urge Bangladesh to immediately release Kajol and hold those responsible for his inhumane treatment to account,” the human rights organization added.

In a press statement, ARTICLE19 Bangladesh and South Asia Regional Director Faruq Faisel said: "Kajol has been in jail for almost four months. His bail application has been rejected 13 times, so far. The process by which Kajol has been detained has created a negative perception in the international arena about the situation of freedom of expression in Bangladesh and the protection of human rights. Therefore, in order to save the image of the country on the world stage, the government should immediately release Kajol.”

“’All States devoted to the right to freedom of expression must take all necessary steps to ensure the safety of all journalists and media workers – commitments on paper are not enough,” the statement said.