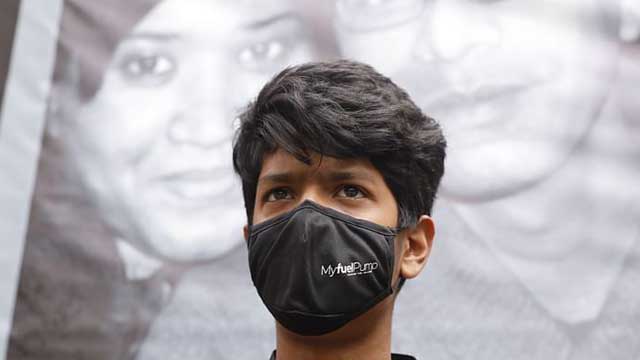 Family members and journalist community are frustrated as Rapid Action Battalion failed to submit the charge sheet in the sensational double murder case of journalist couple Sagar Sarowar and Meherun Runi in nine years of their murder.

Sagar, the then news editor of Maasranga TV, and his wife Runi, senior reporter of ATN Bangla, were murdered at their rented apartment at Paschim Razabazar in the capital in the presence of their minor son Mahir Sarowar Megh on February 11, 2012.

RAB investigators repeatedly said that the ‘investigation was on’ and it ‘would take appropriate legal steps’ though the investigators sought time on dates one after another and the Dhaka Metropolitan Magistrate court have so far deferred dates of submitting the probe report in the case for 78 times.

‘The dates of submitting the probe report were deferred for 78 times. I will say that it is part of a drama, it is nothing but a eyewash and a mockery of the system,’ said Runi’s brother Nowsher Alam Roman, who filed the murder case with Sher-e-Bangla Nagar police station as the complainant.

‘There had been no progress whatsoever in the investigation for nine long years. If an institution like RAB was sincere, it would have submitted the charge sheet by now,’ he said.

‘But whatever the situation, we want justice,’ he said

Senior journalist Monjurul Ahsan Bulbul termed the delay a continuation of the country’s culture of impunity and said, ‘Justice seems elusive in Bangladesh when journalists are murdered and oppressed.’

‘Justice delayed is justice denied. If they found nothing they should submit the final report acknowledging that they found nothing,’ he said, expressing his dissatisfaction while urging the government to look into the matter.

‘We are dissatisfied with the probe into the Sagar-Runi murder case but we would continue to demand justice. We urge the government to ensure justice,’ said Morsalin Nomani, president of Dhaka Reporters’ Unity.

He also mentioned that there had been movements demanding justice since the murder of the journalist couple.

For the last time on February 3, Dhaka Metropolitan Magistrate Debdas Chandra Adhikary deferred the date of submitting the probe report in the journalist couple murder case to March 11.

RAB spokesperson Lieutenant Colonel Ashique Billah told New Age that the investigation officer of the case, an experienced police officer, would take the next legal steps following the law.

After the murder of the journalist couple on February 11, 2012, the then home minister Sahara Khatun publicly promised to bring the assailants to book within 48 hours.

The journalist leaders and their colleagues staged a demonstration for weeks and held numerous human chains in the last nine years.

Bangladesh Federal Union of Journalists faction president M Abdullah alleged that the culture of impunity was responsible for the failure of completing the investigation.

‘The then home minister’s assurance for arresting the offenders in 48 hours means that the law enforcement agencies by that time came to know about the killers,’ he said, alleging that investigation might have become stalled as influential people close to the government were involved in the murder.

The bench directed RAB to submit a report about the progress in probes by March 4, 2020.

At the hearing, RAB investigator and additional police superintendent Khandaker Shafiqul Alam submitted that there had been no progress in the investigations.

Khandaker Shafiqul Alam was the seventh investigator in the case since July 4, 2019.

When the court asked him to explain whether Sagar’s missing laptop had been found, he replied in the negative. He submitted that RAB sent four samples to the USA for the DNA tests.

Lieutenant Colonel Ashique Billah said that the IO had received the reports in this regard and had taken appropriate legal steps.

On March 8, 2015, Tanvir was freed on bail by the High Court Division while seven other accused are in jail custody now. Palash jumped bails and went into hiding and no information was available on him so far.

The family members and journalist colleagues would remember the murdered couple today in separate events.

A faction of BFUJ led by M Abdullah on Wednesday staged a demonstration in front of the National Press Club seeking justice for the victims’ family and the journalist community.