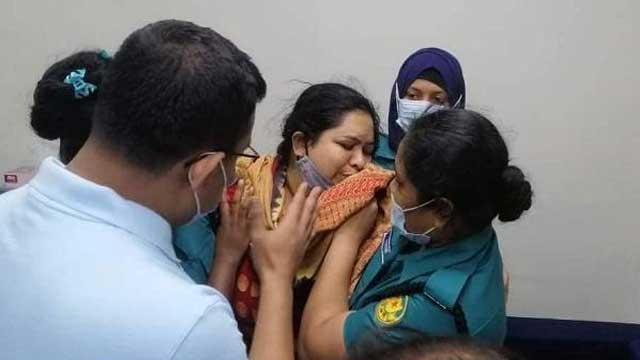 Rozina Islam, a senior correspondent of the Bengali newspaper Prothom Alo, has been arrested in a case filed by the Health Ministry under the colonial-era Official Secrets Act, hours after her confinement at the Secretariat.

Deputy Secretary Sibbir Ahmed Osmani filed a case under sections 379 and 411 of the Code of Criminal Procedure, and sections 3 and 5 of the Official Secrecy Act 1923 on Monday night, according to Harunur Rashid, additional deputy commissioner (Ramna Division) of Dhaka Metropolitan Police.

Before filing of the case, high officials of police’s Ramna Division and the Shahbagh OC spoke to Rozina Islam inside Shahbagh police station.

Police took her into custody at the Secretariat around five hours into her confinement in a room accusing her of taking photos of important official documents at the room of Md Saiful Islam Bhuiyan, the personal secretary (PS) to the secretary of Health Services Division.

Rozina Islam fell sick after being held confined for five hours inside the Bangladesh Secretariat reportedly by Health Ministry officials on Monday, May 17, 2021 | Collected

On Monday night, a complaint was filed against her by the ministry seeking investigation.

Journalists of different outlets demonstrated in front of the police station protesting the harassment of Rozina Islam and demanded her release.

Meanwhile, Amnesty International South Asia chapter and Committee to Protect Journalists have also condemned the incident and demanded that the journalist be freed immediately.

At one point, the additional secretary frisked her body and found some files, and saw photos of documents on her mobile phone. Later Shahbagh police took her in their custody led by an additional police commissioner posted at the Secretariat.

The incident took place at a time when the government is engaged in negotiation over purchase and collection of Covid-19 vaccines, and is working on preparing memorandum of understanding and other non-disclosure agreements, the complaint adds.

However, Rozina Islam said that she had gone to meet the Health Services Division secretary. At the time, PS Saiful Islam misbehaved with her. She claimed that she had not taken any files from the room.

At one moment of her confinement, Rozina fell unconscious.

Sajjad Sharif, managing editor of the Prothom Alo, told this correspondent that the newspaper would issue an official statement in this regard soon.