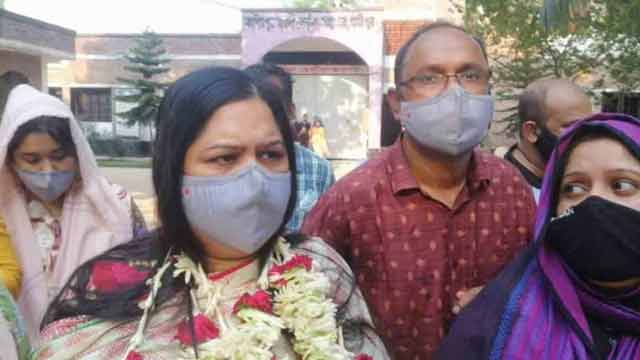 Journalist Rozina Islam was released on bail hours after a Dhaka Metropolitan Magistrate court granted her bail plea in a case lodged with Shahbagh Police Station by a health ministry official on May 17.

She along with her family came out of the Kashimpur Jail in Gazipur at about 4:15pm on Sunday.

Earlier in the morning, metropolitan magistrate Baki Billah who heard the petition on Thursday and kept the decision pending for Sunday passed the order on Tk 5,000 bail bond.

The court also said that the journalist would have to submit his passport to the court.

He court decision came amid protests by the journalists, politicians, rights and civic groups across the country. The United Nations and different international rights organizations also expressed concern over arrest of Rozina, a senior reporter of Bangla daily, the Prothom Alo.

On May 17, Rozina was kept in confinement at the secretariat for over five hours before handing her over to Shahbagh police and lodging a case by a health ministry official under the Penal Code and the colonial Official Secrets Act 1923 against her.

In the case the health ministry official alleged that Rozina lifted secret documents related to Covid vaccine procurement with two vaccine-producing countries and took photographs of the documents.

She was produced before a court by the Shahbagh police on May 18 and the court sent her to jail rejecting a police plea seeking her 5-day remand.

Meanwhile, the case was transferred to the detective branch of police on Wednesday.