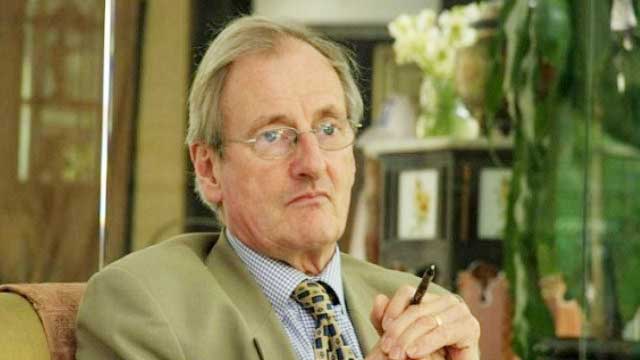 British journalist Simon Dring, a friend of Bangladesh during the country’s Liberation War in 1971, passed away in a hospital in Romania.

‘Our friend Simon Dring died at a hospital in Romania on Friday (July 16) while undergoing treatment there,’ said former president of Bangladesh Federal Union of Journalists, Monjurul Ahsan Bulbul.

Simon left behind his partner Fiona and two young children, Ava and India.

Simon was awarded Muktijuddha Maitree Sammanana by Bangladesh government in 2012.

The veteran journalist won numerous awards in Britain and internationally.

Bangladesh’s liberation war affairs minister AKM Mozammel Haque, in a statement on Tuesday, expressed his deep shock at the death of the British journalist and condoled his bereaved family members.

‘He was the first foreign journalist who risked his life to present the real picture of Pakistani occupation army’s mass killings and barbarity on unarmed Bangalees to the world community…. His contribution during the Liberation War will always be remembered in Bangladesh,’ the minister said in his condolence message.

Simon Dring was one of the foreign journalists who risked their lives and reported on the liberation war of Bangladesh in 1971 from the field.

Simon began his career as a journalist at the age of 18 when he travelled to the Far East and joined the Bangkok World Newspaper as a feature writer. He later went on to report on the beginning of the Vietnam war, reporting for Reuters and other news organisations.

In his subsequent career, Dring reported from Bangladesh, Biafra, Eritrea and many other conflict areas while working for The Telegraph and the BBC.

Just before the Pakistan Army launched their infamous ‘Operation Searchlight’ in Dhaka on March 25, 1971, they imprisoned around 200 foreign journalists at the then Hotel Intercontinental to prevent them from witnessing the army’s atrocities all over the city.

To make sure no international journalist could gather any information or proof on the genocide they were committing on the innocent people in Dhaka, the army took these journalists from their confinement in the hotel to Dhaka Airport to send them to Karachi.

However, the then 27-year-old British reporter Simon Dring stayed behind to expose the monstrosity of the Pakistan Army. He risked his life by hiding for over 32 hours at the lobby, kitchen and rooftop of the Hotel Intercontinental.

After the curfew was lifted on March 27 he left the hotel. He roamed around Dhaka on a bakers’ van, hiding from army personnel, collecting information and evidence against the Pakistan military force of arson and mass murder at different areas of the city, including Rajarbagh Police Lines and Dhaka University.

Later, Simon somehow managed to board a flight to West Pakistan and from there, succeeded to travel to Bangkok, preserving the necessary notes he gathered from his perilous and life-threatening assignment.

From those notes, Simon Dring wrote his report ‘Tanks crush revolt in Pakistan’, which is famously known as the first written account of the horrifying genocide and military atrocity in Bangladesh. The report was published on the front page of The Daily Telegraph on March 30, 1971.

Simon was on the plane carrying Khomeini back from Paris to Iran in 1979. He was injured several times and imprisoned in Uganda by Amin where he was threatened with execution.