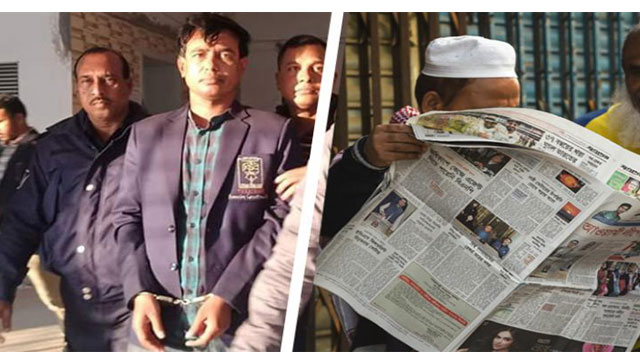 Bangladesh has ranked 150th on the 2019 World Press Freedom Index, dropping by four notches from the previous year.

The index, an annual review of 180 countries and their relationship with the media, was released by the Reporters Without Borders (RSF) on Thursday (Apr 18).

The report says “tougher politics” coupled with “more press freedom violations” resulted in the decline in the index.

Bangladeshi journalists have been among the “leading collateral victims of the tough methods adopted by Sheikh Hasina-led ruling Awami League government.”

The RSF also said Hasina’s re-election in the Dec 30 national polls accompanied by a disturbing increase in press freedom violations, including violence by political activists against reporters in the field, the arbitrary blocking of news websites, and arbitrary arrests of journalists.

Norway ranked top in the 2019 Index for the third time in a row, followed by Finland, Sweden, the Netherlands, and Demark.

Only 24 percent of the 180 countries and territories are classified as “good” or “fairly good”, as opposed to 26 percent last year.

The United States (48th) has fallen three places in the 2019 Index as US journalists have been facing “problematic” situations for “an increasingly hostile climate” under Donald Trump’s administration.

Bangladesh’s neighbour India, however, ranked 140th -- just two spots ahead of its neighbour Pakistan, which comes at 142nd while Myanmar ranked 138th.

Bangladesh government used judicial system is to silence those who annoy them, said the report citing the detention of photojournalist Shahidul Alam for over 100 days as an ‘example’.

“The executive’s latest weapon is the digital security law adopted in October 2018, under which “negative propaganda” is punishable by up to 14 years in prison.

Hostility towards journalists expressed by political leaders in many countries has incited increasingly serious and frequent acts of violence that have fuelled an unprecedented level of fear and danger for journalists, RSF said in a statement.

“If the political debate slides surreptitiously or openly towards a civil war-style atmosphere, in which journalists are treated as scapegoats, then democracy is in great danger,” RSF Secretary-General Christophe Deloire said.

“Halting this cycle of fear and intimidation is a matter of the utmost urgency for all people of good will who value the freedoms acquired in the course of history,” he added.

Published annually by RSF since 2002, the World Press Freedom Index measures the level of media freedom assessing the level of pluralism, media independence, the environment for the media and self-censorship, the legal framework, transparency, and the quality of the infrastructure that supports the production of news and information.