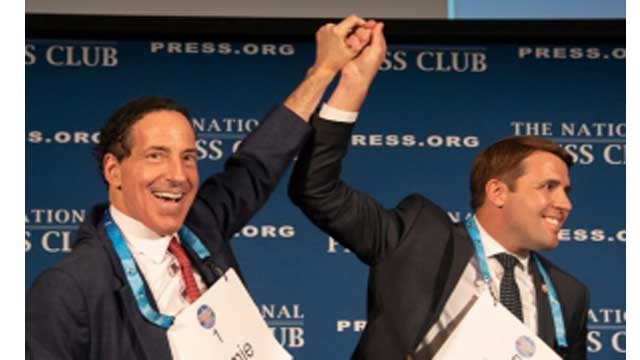 Pappas won the 7th annual bee after correctly spelling the words “beckmesser,” a critic or teacher of music characterized by timid and excessive reliance upon rules, and “occision,” which is the act of killing.

He defeated journalist Eric Geller of Politico, who incorrectly spelled “noctidiurnal,” which means comprising a sequence of day and night.

The Club first pitted politicians against the press in 1913. The Club revived the tradition a century later in 2013. Since 2013, the journalists have won three contests and the politicians tied it up this year.

For the first time, three rounds of “fake news “categories were added to the competition including headlines, critters, and geography. Each contestant was asked to identify whether the headline or word was real or fake and then asked to spell a word. For instance a real headline declared that “Man sheds 120 pounds after being hypnotized into thinking he had gastric bypass surgery,” and Geller was asked to spell “hypnotized.” “Brigadoon” and “Shangri-La” were both identified as being fake before being spelled correctly.

Petri, the 2018 spelling bee winner, was eager to defend her title at the event. But she was knocked out in the sixth round by misspelling roc, a mythical bird.

The bee was hosted by Club President Alison Fitzgerald Kodjak. Dr. Jacques Bailly, the Scripps National Spelling Bee’s official pronouncer and 1980 winner of their competition, officiated, and kept things lively with comical examples of the words in question. He also started the first round with a joke that contained the word to be spelled. Karthik Nemmani, winner of Scripps 2018 spelling bee, read the rules of the competition.

The evening was filled with laughter as both the politicians and journalists made jokes, as well as made fun of themselves. When Raskin, who was on an end, heard Bailly’s first joke, he quipped, “Is this like the debates, where you put the losers on the end?”

Proceeds from the event support the activities of the Club’s nonprofit Journalism Institute.