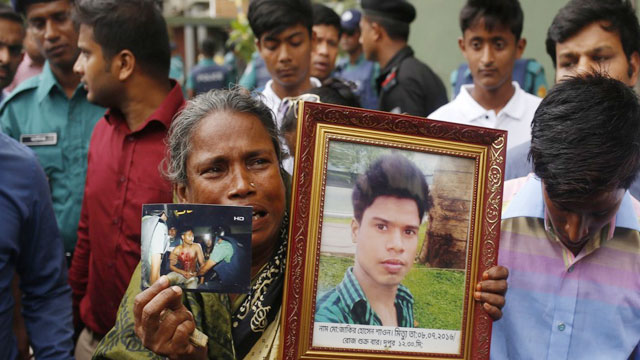 Senior officials of the government, Bangladesh Police and Rapid Action Battalion (RAB), along with diplomats of different countries and officials of various other organizations paid tributes to the victims of the Holey Artisan attack on the 4th anniversary of the tragedy on Wednesday.

They converged in solemn silence at the erstwhile premises of the upscale Gulshan café, where four years ago the most violent militant attack in Bangladesh’s history was carried out.

However, unlike previous years, relatives and family members of the victims were not seen at the café. Moreover, the general people were restricted from entering the site of the incident.

Earlier in the day, embassy officials of the US, Japan, China and Italy solemnly paid their respects to those who lost their lives in the attack.

Speaking to the media, RAB DG Chowdhury Abdullah Al-Mamun said that militancy in Bangladesh was now under considerable pressure and this pressure had to be maintained to win the fight against extremism.

“Militancy is a problem all over the world and all are working to eradicate it. I think we have successfully implemented counter-insurgency activities and I am hopeful we will be able to continue this success,” he added.

The RAB chief said: "RAB had been conducting various anti-militant operations in the country since before the Holey Artisan attack. We had arrested more than 2,000 militants before this attack took place. We detained another 1,000 after the horrific incident from different parts of Bangladesh.

“RAB is conducting operations all across the country to nab more members of such extremist groups even in the current situation.”

“We are always one step ahead of the militants as we are able to catch them before they can execute a plan, with the help of our intelligence divisions.

“Besides, a case has been filed against those responsible for the Holey Artisan attack. The charge sheet has been submitted to the court and the case is currently under trial. We hope that there will be a verdict soon and all the accused will be punished under the law,” he added.

“But amid the Covid-19 pandemic, they are running extensive campaigns on some religious websites to draw the attention of general people.

“In this situation, they [militants] are opting for 'lone wolf' attacks. They are provoking people to attack the police by any means necessary, even with a hammer if possible,” he added.

He said: “The force has been overhauled following the attack on the Holey Artisan, and we have collected huge intel regarding those who are involved in militancy.

“We have crushed them [militants] to their core with our various operations.”